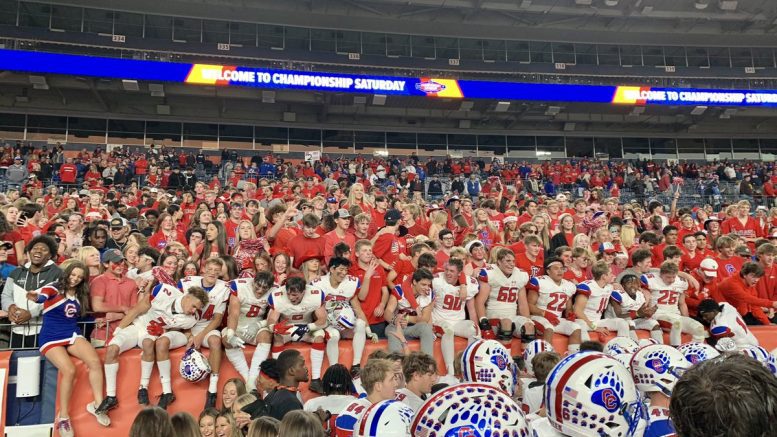 Cherry Creek is now a three-time Colorado Class 5A state champ. Saturday, at Empower Field at Mile High, home of the Denver Broncos, the Bruins beat Valor Christian 21-0 in a battle of teams in the High School Football America 100 powered by NFL Play Football.

Logan also serves the voice of the Broncos, a team he played for at the end of his NFL career.

Quarterback Christian Hammond got the scoring underway with a 21-yard touchdown pass to Maxwell Rodriguez. On the Valor Christian’s next possession, Henry Lamar had an 18-yard Pick-6 to give the Cherry Creek, ranked No. 98 in the HSFA 100 national rankings, a 14-0 lead.

The final score of the game came in the second quarter when Hammond hit Ismael Cisse on a 39-yard touchdown strike.

That Bruins defense was strong throughout, holding Valor Christian, ranked No. 54 in our Top 100, to 278 yards of total offense with three interceptions. The Bruins held Oklahoma-recruit Gavin Sawchuck to 77 yards rushing on 29 carries.

Saturday’s 21-0 win matched the same score between the two in the 2020 5A championship game. The game marked the third time in four years that the Bruins and Eagles have played for the title in Colorado’s largest classification.

5A State Football Championship: FINAL from Empower Field at Mile High – Cherry Creek is your 5A State Champion for the 3rd straight year with the 21-0 win over
Valor Christian. Congrats to Coach Dave Logan and the Bruins!! @creeksports @CreekAthletes @CreekFB @CCSDK12 pic.twitter.com/HqVQkCJ4eU