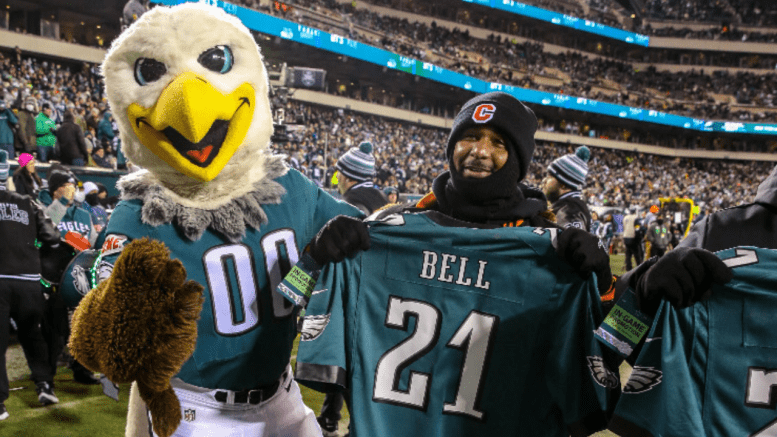 Photo courtesy of the Philadelphia Eagles

Chester High School’s LaDontay Bell is a finalist for the 2021 Don Shula NFL High School Coach of the Year Award. Bell is the Philadelphia Eagles‘ nominee for the award that salutes high school football coaches for their character and integrity, devotion to serving the community, commitment to player health and safety, and on-field success.

Bell, who has been the Chester’s head coach since 2016, led the program to its first-ever playoff appearance in 2021. The Clippers finished 7-4.

Below is excerpt from the Eagles’ news release honoring Coach Bell:

Coach Bell began his career at Chester High School as an assistant coach in 2015, before quickly becoming head coach in 2016. After two back-to-back 2-8 seasons, in 2019 the Clippers became a true competitor with a 7-3 record. Last year, during an unusual COVID-19 season, Coach Bell led his team to a Spring championship in the United X League.

“From the start of his career with Chester, LaDontay’s dedication to his team and his community has greatly impacted the team’s success and lives of his players,” said Daniel Levy, Manager of Youth Football & Community Relations, Philadelphia Eagles. “Not only is Coach Bell devoted to his players’ success on the field, but more importantly, he goes out of his way to ensure their everyday safety, so they are able to continue their academic and athletic success. He is a tremendous leader who proudly serves as a great example to the youth of his community. We are proud to nominate him for this distinguished honor.”

In the midst of creating a successful football program, Coach Bell has had a harder task at hand. Gun violence is something that has affected Chester, taking the lives of two players last year and others throughout Bell’s time with the program. Coach Bell’s commitment to keeping his players safe has become his top priority.

To protect his students from the danger of the streets and assure they get to school safely, Coach Bell uses a school van to drive his players to and from school and practice almost every single day, most days making multiple trips. In addition, Bell and his wife have provided bi-weekly meals for his team, and he has created a special ministry amongst his players that is easy to see.

Coach Bell is one now one of 32 nominees representing each NFL club that will participate in the NFL’s week-long celebration of football at the 2021 Pro Bowl in Las Vegas, Nevada.

Additionally, the Eagles will provide Chester High School with $8,000 in recognition of LaDontay Bell’s nomination.

The winner of the Don Shula Award will be announced during the 2022 Pro Bowl, airing nationally Sunday, February 6 at 3:00 PM ET on ESPN and simulcast on ABC.