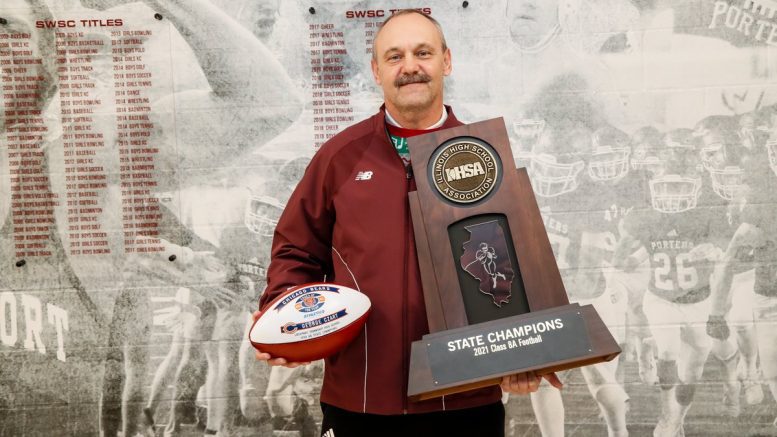 George Czart, who led Lockport Township to its first Illinois high school football state championship since 2003, is the 2021 Chicago Bears High School Coach of the Year. The Porters, who won the Class 8A championship this year, finished the season ranked No. 103 in the High School America national rankings, powered by NFL Play Football.

Czart becomes the Bears’ nominee for the Don Shula NFL High School Coach of the Year award that will be awarded at the Pro Bowl in Las Vegas in February 2022.

“Being recognized as Coach of the Year and as a Don Shula nominee is an honor that I have to share with and give thanks to many people,” Coach Czart said in a new release from the Bears. “We, here at LTHS, have truly succeeded together to accomplish a great feat that the whole community can be proud of. I humbly accept the award on behalf of the community, administration, alumni, parents, staff, coaches and most of all the players that made it happen. Thank you to the Chicago Bears organization for recognizing that we, the Porter Nation, succeeded together.”

Czart took-over as the head coach at Lockport in 2019, after serving as the assistant coach at Lincoln-Way West High School. He was the defensive coordinator for Lockport from 1994-2006, during which time the Porters won two state championships in 2002 and 2003.

The year before Czart took-over the program, the Porters finished 0-9.

The Bears will make a $2,000 donation to the LTHS football program in Czart’s honor.

The @ChicagoBears are proud to recognize Coach Czart of @LockportHS205 as the Chicago Bears High School ‘Coach of the Year’ brought to you by @Athletico & our #DonShula nominee.

Deserving high school coaches are nominated by a panel of local prep authorities. Since the program’s inception, which also includes the “High School All-Star” program that began in 2011, the Bears have donated more than $326,500 to Illinois high schools in support of their football programs.