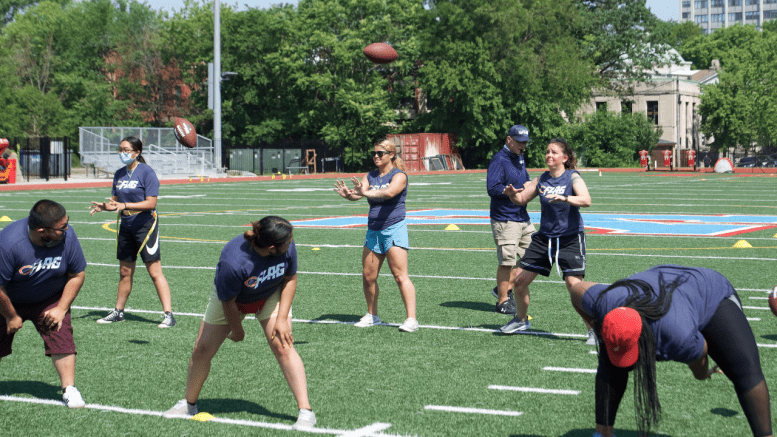 The Chicago Bears are the latest National Football League team to get involved in the sport of girls’ flag football.

On Monday, the Bears and Chicago Public Schools (CPS) announced the launch of Chicago Public League Girl’s Flag Football, in conjunction with NFL FLAG and Nike.

“Being able to share our love and passion for the game of football with more youth and provide a chance for girls to play in an organized league at the high school level is an incredible opportunity and something we’re all excited about,” said Bears head coach Matt Nagy. “We’re proud to partner with CPS, NFL FLAG and Nike to help make this league come to life.”

All players will have the opportunity to attend a kickoff jamboree in August, during which they’ll participate in various clinics and tournament-style games. The 22 teams will be split into four divisions and each play five regular-season games from September through October. The league will hold a playoff tournament and present the Chicago Public League Girl’s Flag Football champion with a trophy.

“At the Chicago Public Schools, we pride ourselves on a rich athletic history steeped in tradition,” said Chicago Public Schools Director of Sports Mickey Pruitt, who is also a former Chicago Bear and Super Bowl XXVII Champion. “We are excited to make history once again as we launch the first high school girl’s flag football league in Illinois right here in Chicago. This initiative will create more equitable opportunities for young women in sports and will encourage our students to continue to be trailblazers on the field, in the classroom and in their communities. We are proud to partner with the Chicago Bears, Nike and NFL FLAG as we champion the importance of promoting young women in sports through Chicago Public League Girl’s Flag Football.”

NFL FLAG hosted a virtual clinic on May 15 to educate coaches on the rules and essential components of flag football. Coaches also participated in an in-person clinic on June 12 at Kenwood High School, where FLAG organizers instructed coaches on flag football skills, drills and rules.

“Earlier this year, NFL FLAG was proud to work with the Seattle Seahawks and Atlanta Falcons to help bring girls flag football to their communities,” said NFL FLAG Executive Director Izell Reese. “We are thrilled to team up with the Chicago Bears to bring girl’s flag football to Chicago and help create opportunities for young women to compete and potentially earn scholarship opportunities through the game of flag.”

Later this summer, teams will unveil their uniforms, which is part of Nike’s $10,000 grant to help launch the league. Nike will provide each school with custom team Nike uniforms from their new Girls Flag Football line of apparel. New cleats will be provided for all players thanks to a donation from Nagy and a grant from Bears Care.