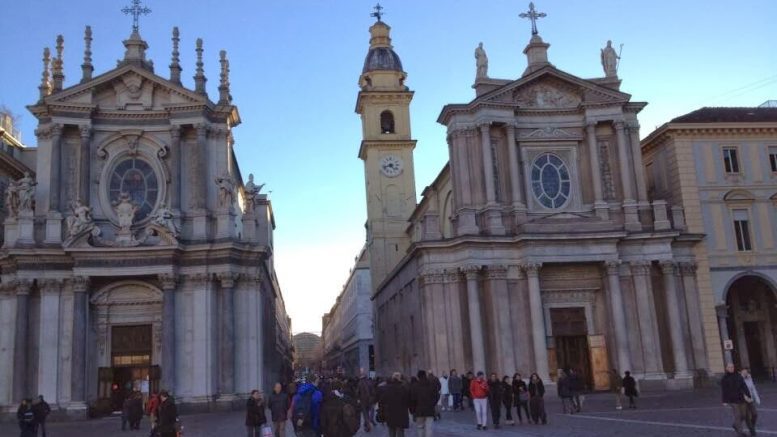 Editor’s Note: This is the first in a series of blogs that will be written by Notre Dame graduate Chris Salvi, who is playing his first year of professional football in the Italian Football League (IFL) with the Torino Gaguari – Jaguars in English.  The IFL allows teams only two American football players.  Salvi, who is 5-10, 180 pounds, plays free safety.  What makes Salvi’s story interesting is the fact that he was, in his words, “a Zero-Star” recruit who, a la Rudy, walked-on at Notre Dame.  Unlike, Rudy Ruettinger, Salvi played a lot as a star special teams performer for the Fighting Irish.  By his senior season, Salvi was awarded a scholarship by head coach Brian Kelly.

High School Football America has asked Salvi to give our readers an inside look at his Italian journey throughout the 2014 season that begins in March after a month-long training camp.  Below is his first entry.  You can also learn more about Salvi by listening to our radio show interview with him before he left America on his journey. To give a quick background on myself I grew-up in the north suburbs of Chicago and played football at Carmel Catholic High School. I went on to play a year at Butler University then transferred to the University of NotreDame where I walked-on

to the football team. What makes my story even a little more interesting is that I now play professional football…. in Italy for the Torino Giaguari (Jaguars in English). Yes, they have American football in Italy and other countries around Europe.  So I went from playing most of my college career for free to now being paid to play, with the compensation of PIZZA!

My journey began at O’Hare Airport in Chicago on January 31st, where I finally got to meet my teammate Niles Mittasch in person. Niles is the only other American on the team and played running back at the University of Oregon.  Two flights and twelve hours later we arrived in Torino, Italy.

The greetings by Roberto (president of the Gaguari), Rico (head coach) and Frank (team manager) gave a small taste to how different we are from Italians – a kiss on both sides of the face from each of them.

They took us to our new home where I was in for a few surprises.

First, they don’t use clothes dryers, so you have to hang the clothes to get them to dry out. I don’t like doing laundry to begin with, so that wasn’t a good surprise! Next was the TV, as a snob, I was hoping there would be some channels in English.  There’s one channel and it is MTV. That is probably my least favorite channel, so I find myself eating breakfast while watching the cooking channel. These are just two examples of the differences I have seen in the first week.

After a day and a half of getting settled in, it was time for practice. To my likening the practices are run with efficiency. They have a practice plan every single day and we waste little time going from drill-to-drill. However, there are moments when a discussion of a scheme can get a little long.

The communication between players and coaches is much different then we Americans know. In our experiences we are used to being told what to do while only asking direct questions. Italians, on the other hand, discuss with the coaches at length about schemes, plays, or techniques.

Italians are a passionate people that enjoy talking and although I don’t understand a single thing they are debating, it is easy to tell when it gets heated, which is actually refreshing to see. I always want players and coaches to be heavily invested in what they are doing, and it’s clear that they are.

To give you an idea about the players, our linebackers average about 220lbs. By no means are the players small, but the skill level and knowledge of the game is not like the D1 college level. Plenty of very talented Italian players are sprinkled in to make it competitive.

After a week of a couple practices and gym sessions, the weekend arrived. Italians LOVE the weekend and that’s an understatement.  Some of the players took us out to the bar that is own by one of the coaches. They introduced me to a few Italian drinks I have never heard of and we engaged in some football conversation.

I am lucky to find that most of the players are able to speak English well, but there are plenty of  moments when we have no idea what each other is saying. I must also point out that the women in Italy are beautiful, but the language difference makes it difficult to hold a full conversation, and it makes it that much more fun.

The first week in Italy has been interesting and exciting. These are just a few snippets to my overall football Americano experience so far.  I already feel I could write a chapter of a book.