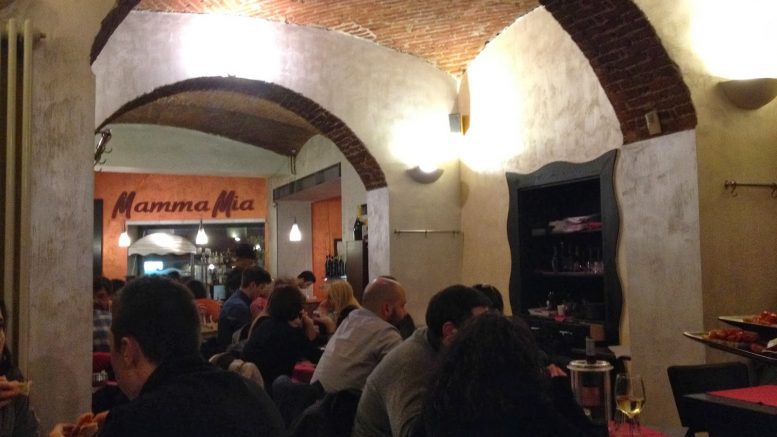 Week 2 of pro football in Italy started-off in a bit of a fog, because it was hard to turn down a new teammate, who was determined to show me a good time last Sunday.  It’s not my usual style to have a crazy non-stop weekend like last weekend, let alone on a Sunday! It was fun, but I paid for it – going to have to slow down a little on this aspect of the experience.

It was a week loaded with football – four practices and three workouts.  Tuesday was the first day we practiced. It was a beautiful night in Torino. The weather here is nice for February, especially compared to what I am used to in Chicago or South Bend.

On Tuesday, the defense started to really get down the schemes with a few minor mistakes. Some of those mistakes were on my part. The plays are called in Italian using mostly numbers and colors. “Dodici” (twelve) is screamed out for the blitz part of the play. All that my brain hears is the “Do” and it leaves out the other part.  The other part, “doci”, would change how I cover, so needless to say, it went very wrong.

During Thursday’s practice I got to “warm up” my helmet – it came on a quick option to my left. I came screaming down hill to give a pop to our Italian running back. He sees me, and at the last second, lowers his helmet into mine. He’s ex-Italian military, a fearless dude and not going to just take a hit, he delivered one. I am definitely the one that took the blunt of that blow. It was good to feel some of the harsh realities of the sport. It’s something that is inevitable in this game, a reason why it’s so exciting.

A lot of Friday and Saturday was spent lounging around or going to some stores, which is an adventure within itself. I have been to about 4 or 5 different grocery stores and unable to get my hands on any peanut butter! That has always been a part of my diet, so I have had to settle on Nutella, I am not complaining about that though.

Friday night, which happened to be Valentine’s Day, was spent at the team restaurant with Niles Mittasch, who is my only American teammate. Mamma Mia is a where Niles and I are allowed to eat for free…it’s actually in our contracts!  So, it’s true, we do play for pizza and I am addicted to the pizza at Mamma Mia. I have had it everyday since my arrival.

Today (Sunday) was filled with a long practice from 10am-1pm. The weather is starting to get nice. Around 15 degrees Celsius, that’s about 59 Fahrenheit…for February that is great! I am used to the football season starting off very hot then eventually getting bitterly cold. The opposite happens here, which I think I prefer, and something to look forward to as the season goes along.

Defensively today we played with some good intensity and took it to the offense. Our D-Line and linebackers dominated short yardage situations. Still got some things to work on, but for me I had two dropped possible interceptions. I better get my hands before the start of the season, because I don’t ever want to miss those opportunities in a game.

After practice Niles and I went over to Rico’s (Head Coach) house for a big lunch. As usual the food was great, Rico’s wife made delicious lasagna. It was accompanied by peppers, fresh mozzarella, and rice balls (I forget the name!). Rico, his wife, and daughter are always very hospitable to Niles and I. Good experience every time they have us over.

It’s easy to say that this was another successful week in the journey of Football Americano.

Editor’s Note: This is the second in a series of blogs that are being written by Notre Dame graduate Chris Salvi, who is playing his first year of professional football in the Italian Football League (IFL) with the Torino Gaguari – Jaguars in English.  The IFL allows teams only two American football players.  Salvi, who is 5-10, 180 pounds, plays free safety.  What makes Salvi’s story interesting is the fact that he was, in his words, “a Zero-Star” recruit who, a la Rudy, walked-on at Notre Dame.  Unlike, Rudy Ruettinger, Salvi played a lot as a star special teams performer for the Fighting Irish.  By his senior season, Salvi was awarded a scholarship by head coach Brian Kelly.