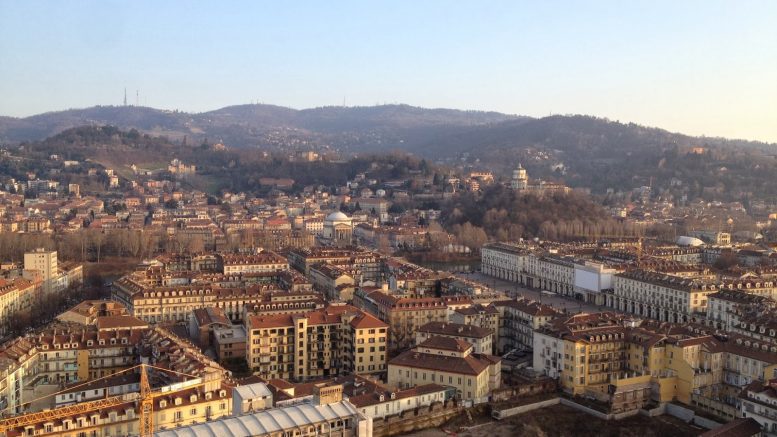 I have to start this week’s recap with a few thank you’s.

Dario, the announcer for the Torino Giaguari, fixed us up with hundreds of TV channels – plenty of them are in English so I am able to keep up with what’s going on.

Second, coming through in the clutch was Frank Cerra. our team manager. After reading my complaint about the lack of peanut butter that I mentioned in last week’s blog, he brought me a jar of peanut butter.

Lastly, thanks to Rossana (wife of my head coach), who has not only cooked Niles Mattisch (my only American teammate) and I meals at her home, but made us pasta twice this week! Actually one of those pasta night’s came right when I ran out of food, so it was perfect timing. It’s hard to beat that Italian hospitality!
Tuesday was the first practice since I arrived in Italy where I felt like I wasn’t thinking too much.

Those that play or have played football know what I am talking about. When coaches install new material, sometimes players over-think and don’t let loose. I feel as though I should be past that mental part of the game, at this point in my life, but I guess I still need to make progress in this area.

I know one thing that is challenging me sometimes is trying to figure out the play call since it’s in Italian. On Tuesday, I felt a lot better about it and just played football.

From my perspective, small strides are made every day by the team. However, there seems to be a couple of issues that, as a defense, need to be fixed. We have time until our first game. Every team and unit goes through this, especially the closer the season gets. Nothing is ever perfect, and the unexpected should be expected.

An aspect of practice that gives me conflicting feelings is the good or poor performance of players on both sides of the ball.

An example of this is as a defender I always want my fellow defensive players to win their match-ups. For instance Reno (one of our strong side backers) picked off our QB, which happens to be his brother, during a scrimmage. I loved the play Reno made, but I also don’t want to see interceptions thrown from our QB!

On the other side of the coin, after a poor week from the offensive line last week, the line stepped it up and gave Niles some room to run. That’s always a plus, but Niles also came barreling down on me untouched a few times in the scrimmage. I don’t want that happening in a live game.

Bottom line – there’s always something to fix in football – it’s a harsh reality coaches have to deal with everyday.

Something that everyone on the team likes to see is a player competing hard against his teammate. We are making progress in this area. Every team needs this sort of competition to win. If we don’t start to grow in this area, it could be a long season.

During the weekend, I explored Torino a little more. Sunday afternoon Niles, Ilenia, and I went to Mole Antonelliana. This is the building that represents the city best. It is the tallest building in the city and by law; no building can be taller than it.

We went to the top and got a great look at the beautiful city and mountains around it…that’s where I snapped the above photo (right).

The Mole Antonelliana is also a cinema museum called the Museo Nazionale del Cinema – it’s the tallest museum in the world. It’s always enjoyable to learn something new!The view gave me a new appreciation for the city I’m living in and the life I am able to lead right now.

With this week coming to a close, it marks the halfway point of when I arrived in Italy and the first game against the Milan Rhinos on March 15th.

I am often asked how the team stacks up against the rest of the league?

Well, there are not a lot of IFL (Italian Football League) analysts that are breaking down the teams and players. It’s also hard to know since the Giaguari has been bumped-up to the first division this year. The Giaguari has had a lot of success in the second division, but right now there’s no way to say for certain how good we are right now.

I am also a firm believer in “any given Sunday”, so I am sure the season will have plenty of surprises, good and bad. I am confident that most surprises will be positive.

Editor’s Note: This is the third in a series of blogs that are being written by Notre Dame graduate Chris Salvi, who is playing his first year of professional football in the Italian Football League (IFL) with the Torino Gaguari – Jaguars in English.  The IFL allows teams only two American football players.  Salvi, who is 5-10, 180 pounds, plays free safety.  What makes Salvi’s story interesting is the fact that he was, in his words, “a Zero-Star” recruit who, a la Rudy, walked-on at Notre Dame.  Unlike, Rudy Ruettinger, Salvi played a lot as a star special teams performer for the Fighting Irish.  By his senior season, Salvi was awarded a scholarship by head coach Brian Kelly.