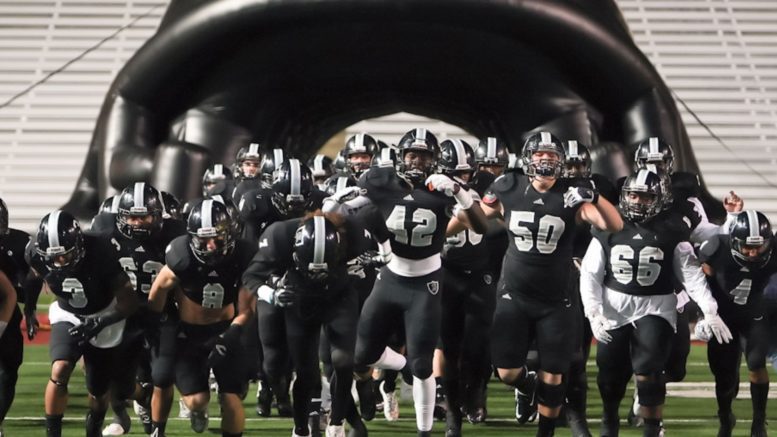 There’s no doubt about it, no team in Texas has been knocking on the door of a Texas high school football state championship more than the Cibolo Steele over the last four years.  The Knights have advanced to the state semifinals three times in the last four years, only to lose to Katy each time in the Final Four.

With plenty of offensive firepower back this year, Steele, which climbed as high as #16 in last year in the High School Football America national rankings, is hoping to find its way back to AT&T Stadium at the end of 2016.  In 2010 in AT&T, the Knights won the school’s only state championship by beating Denton Guyer 24-21 in the Class 5A Division II title game.  They returned to the championship game in 2011, but lost to Dekaney.

Dual-threat quarterback/athlete Xavier Martin, who has given his verbal commitment to Texas Tech, is coming-off a junior year that saw him throw for over 2,100 yards and 21 touchdowns with only three interceptions.  He also ran for nearly 700 yards and eight TDs.

Steele head coach Scott Lehnhoff, who has led the program to a 39-5 record since taking-over in 2013, has compared Martin to former Steele alum and Nebraska QB Tommy Armstrong, who led the Knights to back-to-back title games in ’10 and ’11.

Martin is ranked as the 76th overall college prospect in Texas by 247Sports.

The big question mark heading into fall camp is the offensive line.  Lehnhoff has to rebuild the entire offensive front after everyone graduated from last year’s 14-1 team.

While the Knights should be able to put-up points, there’s no doubt that there’s a ton of talent on defense that will stop opponents from finding the end zone.  Six of the team’s top seven tacklers from last year are back.

Defensive tackle Joshua Croslen is a three-star prospect with 11 FBS offers.  Last year Croslen, who is listed as the 116th overall Class of 2017 prospect in Texas, had five sacks and 54 tackles last year.

Junior defensive back Caden Stearns has offers from Baylor, LSU, Oklahoma, Oklahoma State, Texas Tech, UTSA and UCLA after a sophomore season with 56 tackles and three interceptions.  Also returning in the secondary is Tavian Carter.

We’ll find-out right-off-the-back how good the 2016 version of the Knights will be when they host 2015 Class 6A Division II runner-up Lake Travis on September 2nd.