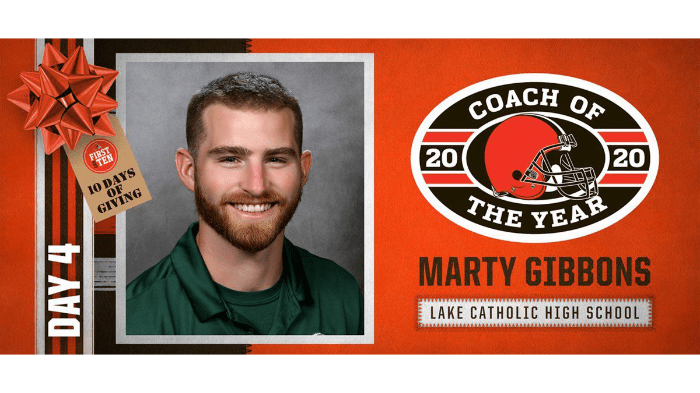 This past season, Gibbons led his team to a state runner-up finish in Ohio’s Division IV, losing to Van Wert 31-28 in the state championship. Gibbons is a Lake Catholic alumnus helped the school capture state championships as a student-athlete in 1991 and 1992.

Day 4 of 10 Days of Giving🎁- We’re proud to present this year’s Browns High School Coach of the Year – @Marty_Gibbons! 👏

Gibbons, Lake Catholic H.S., has dedicated himself to the game of football, his community, players + coaches. Congrats, Coach!

Gibbons was named the Cougars’ head football coach following the 2018 season. He’s led the team to a 14-10 record in two years as head coach. This year’s state championship appearance marked the first time Lake Catholic reached the title game since 2001.

“I was shocked [to receive the 2020 Cleveland Browns High School Coach of the Year] to be honest – I had no clue it was coming today,” Gibbons said when learning of the award during a socially-distanced event at Lake Catholic High School. “I am so proud of our kids and our players. I am glad they got to be a part of this because it is really an indication of those kids and what they were able to accomplish this year. I am just reaping the benefits of that. I am very proud of the kids. For me, that is really what it is about. It was cool for them to get to experience it.

In his free time, Gibbons runs the local CYO football program on Sundays during the season and is engaged in various community efforts throughout Lake County while also encouraging his players to do the same.

“Marty goes above and beyond the norm and is truly a players’ coach,” said Lake Catholic Athletic Director Sam Colacarro. “He cares for the young men both on and off the field and reinforces the importance of being outstanding representatives of Lake Catholic and the mission and core values that we instill. The players love him and respect what he does for them, and they invest 100% into his program. Marty is a man of faith, integrity and humble character, and his players respond to his leadership in all aspects of their lives.”

The Browns High School Coach of the Year award is based on a coach’s overall body of work during the regular season and postseason, as well as character and community involvement, after being featured in the Cleveland Browns High School Game of the Week.

In recognition of Gibbons’ commitment to excellence on and off the field, the Browns and the team’s High School Game of the Week partners will provide a $9,000 grant ($6,000 to the annual winner, plus the $3,000 given to all finalists) to benefit Lake Catholic High School’s football program. Additionally, Gibbons will be the Browns’ special guest during Cleveland’s Monday Night Football game against the AFC North rival Baltimore Ravens at FirstEnergy Stadium on Dec. 14.

For 10 weeks during a typical season, Browns fans and Northeast Ohio high school football supporters submit votes for nominated matchups to be featured as the Cleveland Browns High School Game of the Week. Due to the shortened season resulting from COVID-19 protocols, the 11th consecutive year of the program encompassed Weeks 1-6, as well as the first round of the playoffs.

To begin every week of action, the Cleveland Browns High School Game of the Week panelists – Browns senior manager of digital media Andrew Gribble, Browns producer of content and production Jason Gibbs and 850 ESPN’s Matt Fontana – each select a marquee matchup from the upcoming schedule. After tabulating results from the fan vote both on the team’s website and social media, the Browns then provide extensive coverage of fans’ chosen contest.

The winning head coach from each Cleveland Browns High School Game of the Week is eligible for the annual award, in addition to receiving the weekly $3,000 donation to their program. The head coach also receives a specially customized game ball while the game’s MVP earns a Browns varsity letter patch.

To determine the 2020 Cleveland Browns High School Coach of the Year, the three panel members, as well as representatives from Ohio CAT, LECOM and Raising Cane’s, submitted their votes based on the criteria of on-field success, program development and dedication to their local community.

The 2020 Cleveland Browns Coach of the Year announcement is part of Day 4 of the Browns “10 Days of Giving” initiative. Browns players, coaches and staff members will share unique stories about community initiatives and contributions as part of the team’s yearlong commitment to education, youth football, social justice and inspiring others to support their communities through the First and Ten volunteering movement.