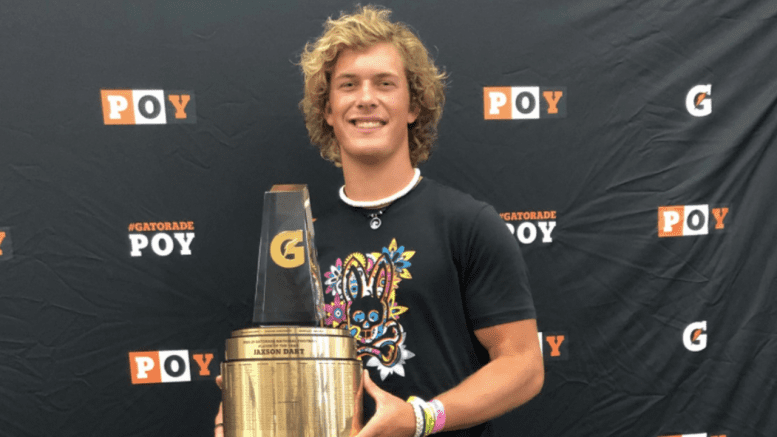 Jaxson Dart is the 2020-21 Gatorade National High School Football Player of the Year.

Last fall, the 6-foot-3, 215-pound senior quarterback passed for 4,691 yards and 67 touchdowns, leading the Corner Canyon Chargers to a 14-0 record and the Class 6A state championship. Dart completed 240 of 345 passes, throwing just four interceptions, while also rushing for 1,195 yards and 12 touchdowns on 128 carries. He was also chosen as the MaxPreps National Player of the Year and was also selected as Mr. Football by the Deseret News.

Dart, who will play his college football at USC, was ranked as the nation’s No. 19 recruit in the Class of 2021 by ESPN.

The Utah State Player of the Year was one of three finalists for the award. Brock Vandagriff of Prince Avenue Christian (Georgia) and Malachi Nelson of Los Alamitos (California) were the other finalists for the 36th annual honor.

The award recognizes not only outstanding athletic excellence, but also high standards of academic achievement and exemplary character demonstrated on and off the field.

Past Gatorade National Football Player of the Year award winners have won six NFL MVP awards and appeared in 31 Pro Bowls. Six winners have been taken in the first round of the NFL Draft and two have been enshrined in the Pro Football Hall of Fame.