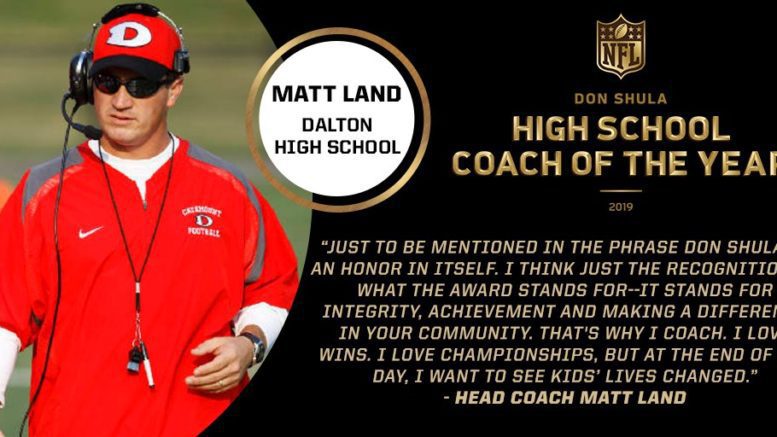 The award, named for the NFL’s winningest head coach, is more than X’s and O’s and wins and loses. It looks at “character and integrity, leadership, dedication to the community (and) commitment to player health and safety.”

Nominees for the Don Shula Award come from all 32 NFL clubs. Land was nominated by the Atlanta Falcons.

“We are incredibly proud of Coach Land for how he has represented his family, school, and the great state of Georgia – he truly is deserving of being named the Don Shula Coach of the Year,” said Atlanta Falcons owner and chairman Arthur M. Blank. “Coach Land’s commitment to his players and community over the last 10 years is a genuine reflection of his character and further demonstrates the life skills taught in and through football by coaches like him make an impact far beyond gameday.”

“Just to be mentioned in the phrase Don Shula is an honor in itself,” said Land. “I think just the recognition of what the award stands for–it stands for integrity, achievement and making a difference in your community. That’s why I coach. I love wins. I love championships, but at the end of the day, I want to see kids’ lives changed. I thank God that this is the way that he lets me do it.”

All 32 nominees were honored during the NFL’s week-long celebration at the Pro Bowl in Orlando. Coaches received VIP access to various events such as Pro Bowl practices, the Play Football High School Skills Showdown and Pro Bowl.

Below is part of the NFL’s news release:

Coach Land became a member of the Dalton High School family more than 25 years ago. A graduate of the 1988 class, he was a part of three football sub region championships, a 34-4-1 record, and was voted captain his senior year. Coach Land walked on at Auburn University as a defensive back, spending four years as a player, and one year as a student assistant coach to the defense. Not only a letter winner, he won the Eddie Welch Attitude and Effort Award in 1991. Upon college graduation, he returned to Dalton to work in a family business and become a community coach, being one of the first five in the state. He has coached at Dalton High School since then and has had more than 20 players who have gone on to play at the collegiate level.

Coach Land will receive $15,000 from the NFL Foundation, $10,000 of which will go to his high school’s football program. He will additionally attend Super Bowl LIV in Miami and walk the red carpet at NFL Honors, a two-hour primetime awards special to air nationally on February 1 on FOX, the night before Super Bowl LIV.

This year’s runner-up was Minnesota Vikings nominee Lambert Brown of Wayzata High School in Plymouth, Minnesota. Brown will also receive $15,000 from the NFL Foundation, $10,000 of which will go to his high school’s football program. He will additionally attend Super Bowl LIV in Miami a special guest of the NFL.

The Don Shula NFL High School Coach of the Year winner was selected by a panel of distinguished individuals:

Past Winners of the Don Shula Award