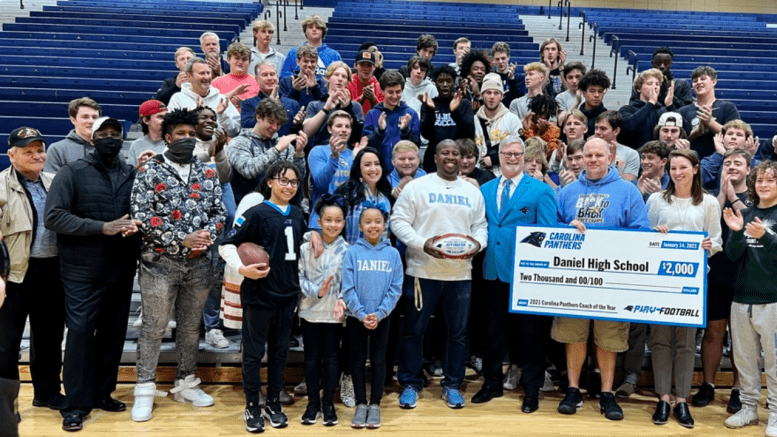 The following is from the Carolina Panthers

The announcement was made in a surprise ceremony in the Daniel High School gymnasium and included the Daniel football team, Panthers representatives, school administrators, and Fruster’s family. Senior quarterback and two-time S.C. Gatorade Player of the Year, Trent Pearman, provided remarks about the special relationship Fruster has with his players. He was followed by senior defensive back and team captain, Brodey Conn, who was backed by a chorus of raucous cheers as he made the formal announcement that Fruster had been selected as the Panthers High School Coach of the Year.

This was cool @DWDanielHigh this AM: the Panthers surprised @dwdanielFB Jeff Fruster as High School Head Coach of the Year, presenting him with a trophy and a $2,000 grant check to benefit @DWDAthletics

As part of Fruster’s award, Daniel HS will receive a $2,000 grant from Carolina Panthers Charities to support the school’s athletics program.

Congratulations to Head Coach Jeff Fruster who was named the @Panthers High School Coach of the Year! pic.twitter.com/00rcg05qLv

As a native of the Central community, Fruster grew up in this football hotbed as a fan of D.W. Daniel Lion football. As an elementary and middle school student, he experienced the community pride of Lion football as Daniel won multiple state championships. As a high school student-athlete, he was part of two Daniel state championship squads in 1995 and 1998. He began his business career after earning his degree from Presbyterian College, where he played linebacker for the Blue Hose. However, after several years in the private sector, his former high school position coach, and then-current Daniel head coach, Randy Robinson, offered him the opportunity to join the Daniel coaching staff in 2006 as a linebacker position coach and teacher of business courses.

Fruster’s natural ability to connect with students and players helped him ascend the coaching ranks, as he became head coach of the JV team and varsity defensive coordinator. In 2016, he realized his dream of leading his alma mater, earning the title of head coach, just the fourth head coach for the school since 1960.

His on-field success is matched by his off-field passion for his school community. His business and leadership classes are popular courses, and the school store he created provides marketing experiences and other career-building opportunities for his students. Fruster engages the Fine Arts students to develop Daniel merchandise and products for the school store and ensures the football team attends performances by the school’s marching band. The broader community also benefits from Fruster’s vision as Daniel players visit the school district’s elementary schools on Fridays in dress clothes to open car doors, greet students and then visit classrooms to read with early learners.

“As a parent of a student that got to see football players weekly, I can attest to the impact this has on elementary-aged students,” high school principal Shannon Sharkey said. “My son still talks about how a particular student-athlete read to them each Friday and how cool impactful that was. The football players are like celebrities to these students, and they are taught about this responsibility by Coach Fruster, the responsibility of being role models. This is reinforced and reiterated. We are proud and grateful for Coach Fruster.”

See what the Panthers are doing in the Community