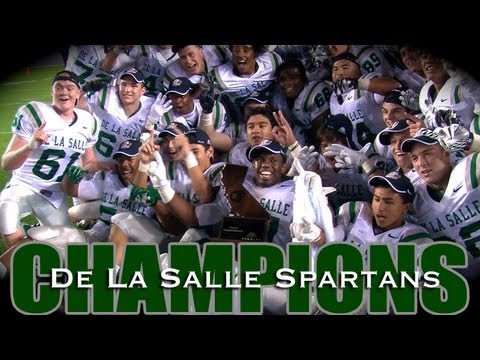 Sunday’s flight home for the De La Salle football team is different then most road trips for the Spartans. The program that once won 151 straight games, doesn’t usually travel home with an “L”.

Saturday night’s 26-21 loss to Euless Trinity before a national television audience on ESPN2, leaves current Spartan seniors with a 43-2 record and a question of what lies ahead for a team that many thought would cruise to its sixth USA Today national championship.

First, head coach Justin Alumbaugh’s team will be alright. De La Salle’s football program is built on more than just X’s and O’s, and Alumbaugh, who’s an alum of the school, knows better than anyone what it takes to focus on the next opponent, which is Serra High School (San Mateo, Calif.), alma mater of the New England Patriots’ Tom Brady, on Friday night.

Alumbaugh knows that his team lost to another program that is rich in football tradition, so there’s no shame in the loss. It is difficult for any high school football team to travel a long distance to play a football game, let alone against a team like Euless Trinity that finished 12-2 last season and returned all of its key players.

The real focus during practice this week will be on the mistakes that Alumbaugh talked to the Contra Costa Times about after the game about.

Alumbaugh will look to his team’s senior leadership to make sure that Trinity is in the rearview mirror and all focus is on Serra. The third-year coach can also draw on his experience from past out-of-state road losses when he was an assistant under legendary head coach Bob Ladouceur.

In 2004, De La Salle traveled to Washington where the program had its record 151 game win streak snapped by Bellevue High School. In 2009, the Spartans lost in New Jersey to powerful Don Bosco Prep.

On the positive side, Alumbaugh can focus the fact that Spartans’ vaunted offense did out-gain the Trojans in total yardage. Remove the mistakes, and the Spartans could have left the Lone State State with a victory.

Maybe the biggest point that Alumbaugh will make to his team this week is that one game doesn’t make or break a season, especially since Saturday night’s loss doesn’t have any impact on the team’s drive for another California State Bowl Championship Game appearance.

Since 2006, when California instituted its season-ending State Bowl Championship Series, the Spartans have never missed a state title game and come December, it’s a pretty good bet that that streak will be intact.