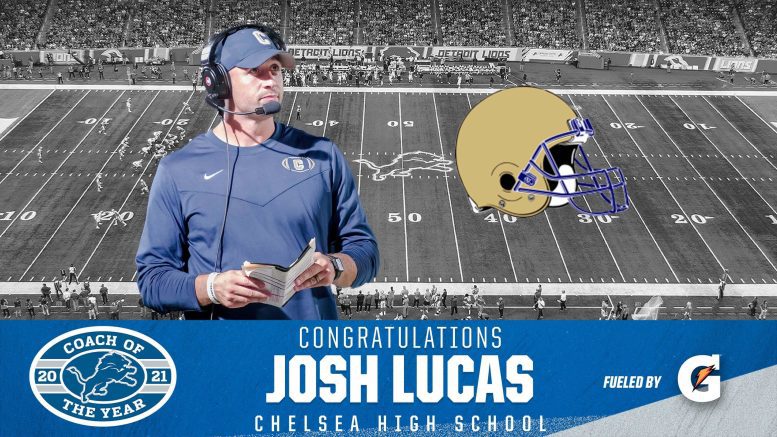 Photo by the Detroit Lions

The following is from the Detroit Lions

The Detroit Lions have named Josh Lucas of Chelsea High School the 2021 Detroit Lions High School Football Coach of the Year. Lucas’s Bulldogs came back from a 28-point deficit, the largest deficit to overcome in state finals history, to defeat Hudsonville Unity Christian 55-52 and win the MHSAA Division 4 state championship in a game with the most combined points scored (107) in MHSAA state finals history. This is Chelsea’s first football state championship and Lucas’s first as a head coach. The Bulldogs, from the Southeastern Conference-White Division finished the season undefeated at 14-0 outscoring their opponents 546-220 and have won 24 consecutive regular season games dating back to 2019.

Each week throughout the 2021 high school football regular season, one coach that best demonstrates success on and off the field, develops players’ character, discipline, and football skill in addition to emphasizing player health and safety in their program, is recognized for their commitment to the team, school, and community. The winner is selected by a panel of high school football media members—Mick McCabe (Detroit Free Press), Hugh Bernreuter (Saginaw News), Bret Bakita (WOOD Radio-106.9 FM, ESPN 96.1 FM-Fox 17/Grand Rapids), James Cook (Traverse City Record-Eagle) and Scott DeCamp (CatchMark SportsNet). Lucas was selected as Coach of the Year by the votes of the aforementioned media members, as well as one vote from the public online voting at DetroitLions.com/coachoftheyear.