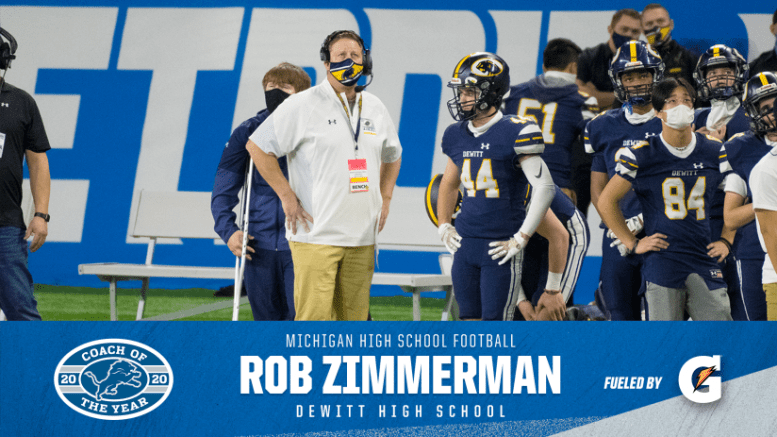 Zimmerman concluded his 30th season coaching high school football, his 25th season overall as a head coach and 22nd as head coach at DeWitt.  During his time at DeWitt, Zimmerman has gone 222-45 (83.1%) with 5 state finals appearances, 12 state semi-final appearances, 12 regional titles, 14 district titles and 18 conference titles in addition to reaching the playoffs in 20 of 22 seasons.  Zimmerman, a 2016 inductee into the Michigan High School Football Coaches Association Hall of Fame, was a Detroit Lions High School Football Coach of the Week in week 7 of the 2004 season.

Each week throughout the 2020 high school football regular season, one coach that best demonstrates success on and off the field, develops players’ character, discipline, and football skill in addition to emphasizing player health and safety in their program, will be recognized for his commitment to the team, school, and community. The winner is selected by a panel of high school football media members—Mick McCabe (Detroit Free Press), Hugh Bernreuter (Saginaw News), Bret Bakita (WOOD Radio-106.9 FM, ESPN 96.1 FM-Fox 17/Grand Rapids), James Cook (Traverse City Record-Eagle) and Scott DeCamp (MLive-Muskegon Chronicle).

This season’s program will award $12,000 to aid in the development and promotion of high school football in the state of Michigan, thanks to contributions from the Detroit Lions and the NFL Foundation.