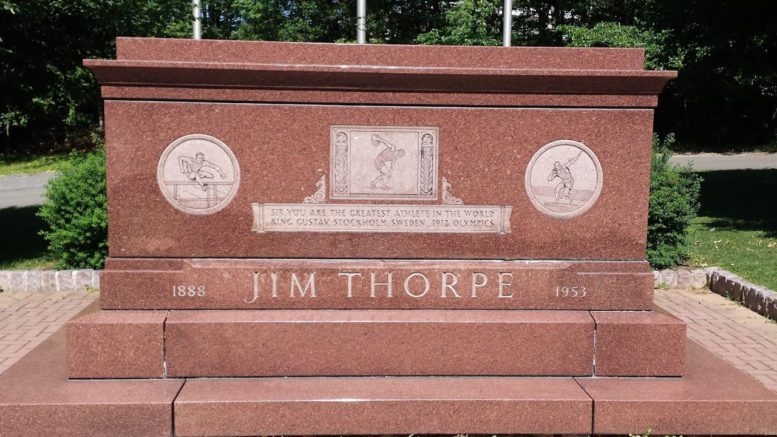 There’s no doubt that Jim Thorpe is one of America’s all-time great athletes, especially on the gridiron. However, there is doubt, at least according to my research, if Thorpe, a Pro and College Football Hall of Fame player, ever participated in high school football.

The reason for this story is Thorpe died on this day in 1953.

What we do know is that Thorpe was a star college football player at the Carlisle Indian School in Pennsylvania before going on to win gold medals in the Decathlon and Pentathlon in the 1912 Olympic Games in Stockholm, Sweden. Thorpe, who played both professional football and baseball, was called “The World’s Greatest Athlete” way before two-sport athletes like Bo Jackson and Deion Sanders.

Today, on the anniversary of his death, I spent a significant amount of time trying to determine if Thorpe played high school football. The reason I did this is because I’ve never heard about Thorpe’s high school days.

And, then there’s the fact that I grew-up about an hour south of Jim Thorpe, Pennsylvania, which was known as Mauch Chunk and East Mauch Chunk until the mid-1950’s. In 1954, the towns merged and adopted the name Jim Thorpe when his widow accepted a monetary deal with the two towns in the western Pocono Mountains to have Thorpe’s body put to rest in the community.

The high school there is now known as the Jim Thorpe Olympians…even though Jim Thorpe himself never stepped foot in the town.

Now, back to the reason for the story, which is centered on whether this incredible athlete played high school football.

The answer, as best I can tell from my research, is NO.

Thorpe, who is a member of the Sac and Fox Nation, was born in Oklahoma with his twin brother twin brother Charlie, who died in 1896. Jim, who reportedly had an interest in sports when he was young, was sent to Haskell Indian Junior College in Lawrence, Kansas after his twin brother’s death.

While some online reporting states that Jim may have enjoyed football during his short stay in Kansas, there’s no conclusive indication that he played the sport in the Jayhawk State.

After returning home to Oklahoma shortly after his time in Kansas, Jim Thorpe enrolled at the Carlisle Indian Industrial School in Pennsylvania on February 6, 1904. However, the teenager, who excelled in track and field, never played football until the legendary Glenn “Pop” Warner invited him to be on the school’s football team that played college football powers like Army and Harvard.

The bottom line is Thorpe, who began as a kicker and punter before becoming one of the best running backs in the country, went right into college football without playing in high school.

While there have plenty of legal battles over Jim Thorpe’s body remaining in eastern Pennsylvania, the courts have ruled that the town has the right to his burial home. In 2015, the United States Supreme Court ended a five-year legal fight over the athlete’s final resting place when it denied an appeal from Thorpe family members.

The town itself has been called the “Switzerland of America” due to the picturesque scenery, mountainous location along the Lehigh River.

In the 1880’s,  Mauch Chuckk had the most millionaires per capita of any city in the United States. Jim Thorpe’s famous mansions and Victorian architecture support the claim that Mauch Chunk was once the home to 13 millionaires.