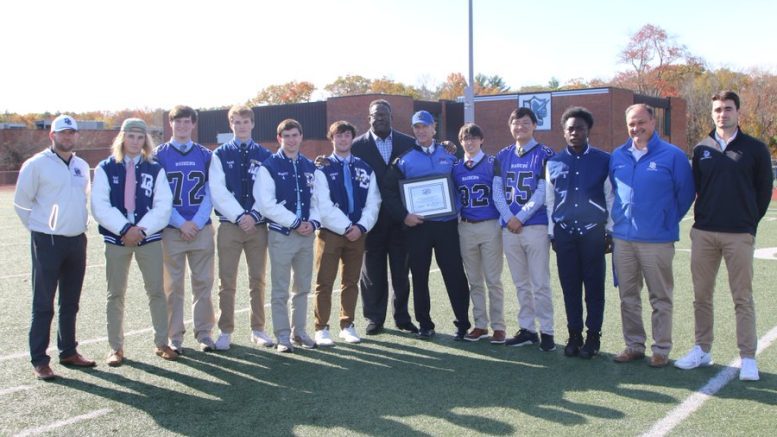 Following a dominant 35-0 victory over the unbeaten Norton Lancers on Friday to clinch at least a share of the Tri-Valley League small title, Dover-Sherborn Regional High School’s Steve Ryan has been named the eighth New England Patriots High School Coach of the Week of the 2021 season.

Coach Ryan, the long-tenured leader of the fiery Dover-Sherborn football team, had his eyes on history Friday night as he guided his squad past the undefeated Lancers and ended the Raiders’ 43-year Tri-Valley League small title drought. Dover-Sherborn scored on their first three possessions while the team’s defense held Norton scoreless throughout all four quarters en route to a massive victory for the school and Coach Ryan.

Dover-Sherborn was fueled by senior running back Efosa Imoda, who rushed for four touchdowns on the day, and senior captain Johnny Bennett, who hauled in a 32-yard touchdown and a pair of interceptions in the second half, to help the Raiders secure their first league crown since 1978. Johnny’s father, Dan Bennett, played on the last Dover-Sherborn championship team in 1978 and now serves as an assistant coach on the Raiders’ staff.

Following a dominant 35-0 victory over the unbeaten Norton Lancers on Friday, Dover-Sherborn Regional High School’s Steve Ryan has been named the eighth @Patriots High School Coach of the Week of the 2021 season. https://t.co/AsxjJ3nNQK pic.twitter.com/H9PJbwCOW9

“Coach Ryan had his boys ready to go from the opening kickoff,” said Tippett. “Leading Dover-Sherborn to their first TVL small title in 43 years, Coach Ryan was an easy choice for this week’s Patriots Coach of the Week honor, and everyone should watch out for this team in the postseason.”

The Raiders will look to ride their momentum into the Division 5 tournament this weekend as they host Watertown on Friday, November 5 at 7:00 p.m. EST.

Patriots, College, and Pro Football Hall of Fame linebacker Andre Tippett, now the team’s Executive Director of Community Affairs, met with the Dover-Sherborn captains and coaching staff Tuesday morning to present the football program with a $1,000 donation on behalf of the Patriots Foundation in honor of Coach Ryan. The visit and check presentation will be featured on the Patriots weekly television show, “Patriots All Access,” which airs on Friday night at 7 p.m. on WBZ-TV in Boston and will be available immediately after on Patriots.com.

Podcast: Jermain Crowell of Belleville talks about being the Detroit Lions High School Coach of the Week