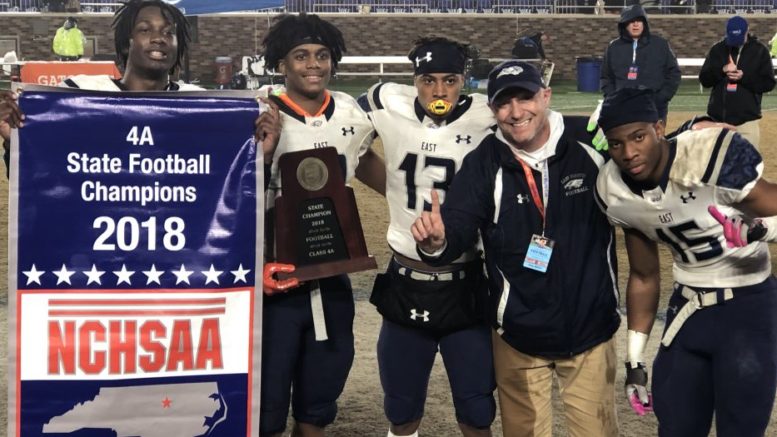 Reprinted from our friends at CarolinaPreps.com

DURHAM, NC – East Forsyth came from behind twice in the second half to tie Scotland, eventually taking the lead with just 2:45 to play and hanging on for a 35-28 victory and the school’s second state championship.

Scotland had the game’s opening possession and they made the most of it as the Scots drove 62 yards in 16 plays using the first 7:50 of the game. Syheam McQueen pushed it across the goal line on a two-yard dive to give the Scots the lead on the first of his two touchdowns.

East Forsyth responded with the next two scores. Micah Crowell scored on a four-yard run with 2:17 to go in the first quarter to tie the game at 7. Ronald Jackson, Jr. then plunged in from three yards out to put the Eagles in front 14-7 with 10:03 to go in the second quarter.

Scotland mounted another incredible drive spanning 13 plays and crossing 57 yards before McQueen tied the game at 14 on a three yard touchdown run with 4:05 to go in the half. Just under two minutes later, East Forsyth surged back in front 21-14 as Ty’Shaun Lyles hit Nick Childs for a 51-yard touchdown strike with 2:12 to go in the half.

Scotland sped down the field in the final two minutes of the half. The Scots ripped off a 66 yard drive in nine plays with Mandrell Johnson sliding in the end zone from two yards out with just two seconds to spare before halftime, tying the score at 21.

Both teams went scoreless through the third quarter, setting the stage for an explosive fourth quarter. Scotland pushed back in front as Joseph McKoy cashed in on a one-yard touchdown run to polish off an eight-play, 60-yard scoring drive and put Scotland up 28-21 with just 10:14 to play.

East Forsyth came alive in the final minutes as Lyles hooked up with Mizell Hall twice for scoring strikes to surge in front 35-28. The first of the two touchdown passes came as Lyles scrambled towards the right sideline, spotting Hall open in the middle of the field and throwing against his body to make the play. Hall pulled the lofted pass in and scampered the rest of the 22 yards into the endzone to tie the game at 28 with 6:03 to go. Then with 2:45 to play, Lyles spotted Hall uncovered in the formation and called for the snap before the play had even been relayed to his teammates, Hall pulled in the quick pass and scurried 14 yards into the left corner of the end zone to put the Eagles on top by the decisive 35-28 margin.

Lyles was named the game’s Most Valuable Player, completing 10 of his 17 passes for 169 yards and three touchdowns including the game winner. Hall was the Eagles Most Outstanding Offensive Player with four receptions for 56 yards and the two game-altering scores. Javon Cobb was the leading tackler for East Forsyth, credited with 13 tackles on the game and chosen as East Forsyth’s Most Outstanding Defensive Player.

Kavon Green was selected as the Most Outstanding Defensive Player for the Scots. Green was tied for the team lead in tackles with four and also pulled in an interception, returning it 15 yards. Joseph McCoy was tapped as Scotland’s Most Outstanding Offensive Player, responsible for 104 rushing yards and a touchdown on 23 carries.

The NCHSAA is committed to promoting good sportsmanship and with the assistance of North Carolina Farm Bureau are pleased to present Sportsmanship Awards to one member of each Championship team that have exhibited good sportsmanship throughout the 2018 season. Scotland’s winner was senior offensive lineman, Tra’von McLean. East Forsyth’s selection was senior defensive back, Khalil Baker.