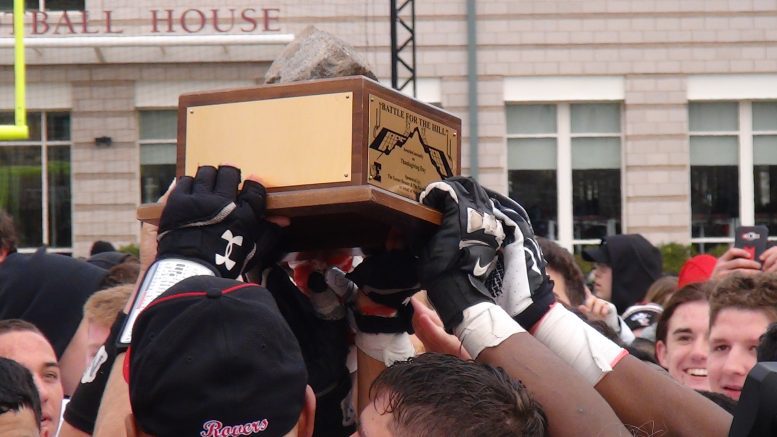 Easton hoists the Forks of the Delaware Trophy.

Easton (Pennsylvania) and Phillipsburg (New Jersey) will not play their annual Turkey Day high school football game this year due to the coronavirus pandemic. Officials from both schools announced via a news release Thursday that the 114th meeting between the two is off “due to recent Executive Orders in New Jersey and Pennsylvania, interstate travel restrictions, a rapid increase in COVID-19 cases in both states and in order to protect the health and safety of all participants and spectators, the Phillipsburg School District and Easton Area School District have made the difficult decision to cancel the playing of the 114th Annual Thanksgiving Day Game on Saturday, November 21st.”

Earlier this week, the schools announced that the game was being moved from Thanksgiving morning to this Saturday with attendance limits. The game, which has been broadcast by ESPN twice, annually draws 13,000-to-15,000 fans to Lafayette College. Last month, school officials announced that the game was being moved to Phillipsburg’s Maloney Stadium, because of COVID-19 attendance restrictions at Fisher Field on the campus of Lafayette.

“We understand this is extremely disappointing news for the many passionate Stateliner and Red Rover fans that have been attending this game for decades. This was not an easy decision or one taken lightly by either District. However, given the restrictions in place in both Pennsylvania and New Jersey, as well as the current COVID-19 realities on both sides of the river, the health and safety of our players, coaches, bands, cheerleaders, staff, fans and both communities must guide our decisions.”