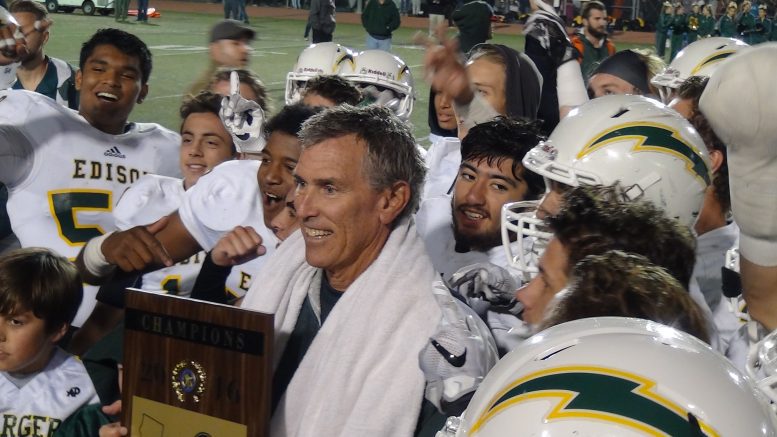 The Edison football team continues to delay head coach Dave White‘s retirement.  Friday night, the Chargers beat defending CIF Division III-AA state champ La Mirada 44-24 to capture the CIF Southern Section Division 3 championship, which means that Edison (13-1) has at least one more game or maybe two.  On Sunday, Edison will find-out, who it will play in the southern regional final, with the winner of that game, going to the CIF state championship game.

Earlier this year White announced that his 31st year as Edison’s head coach would be his last.  But, Friday night, juniors Jack Carmichael and Griffin O’Connor made sure that White’s swan song would have a few more notes.

O’Connor ran for two touchdowns and passes for another, while Carmichael rushed for 181 yards and two touchdowns for the Chargers, who entered the game ranked #10 in the latest High School Football America Southern California Top 25.  La Mirada, which was ranked #7 in our SoCal rankings, finishes with an 11-3 overall record.