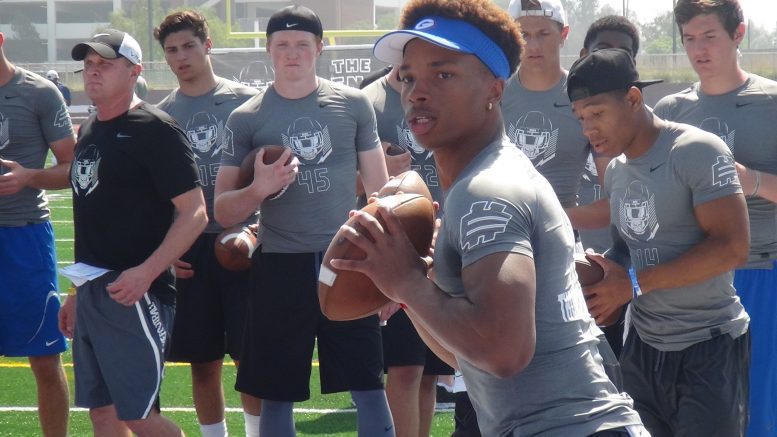 The 6-foot-2, 200-pound quarterback who will lead three-time defending Super 25 champion Bishop Gorman next season but has never started a varsity game under center, announced Sunday via Twitter that he has chosen UCLA as his next stop.

“It’s really a perfect fit for anyone that wants to have the best college experience,” Thompson-Robinson said during an exclusive interview with USA TODAY Sports. “It’s in California, it’s probably in one of the nicest areas of Los Angeles. And a degree from UCLA is going to set you up for life.” 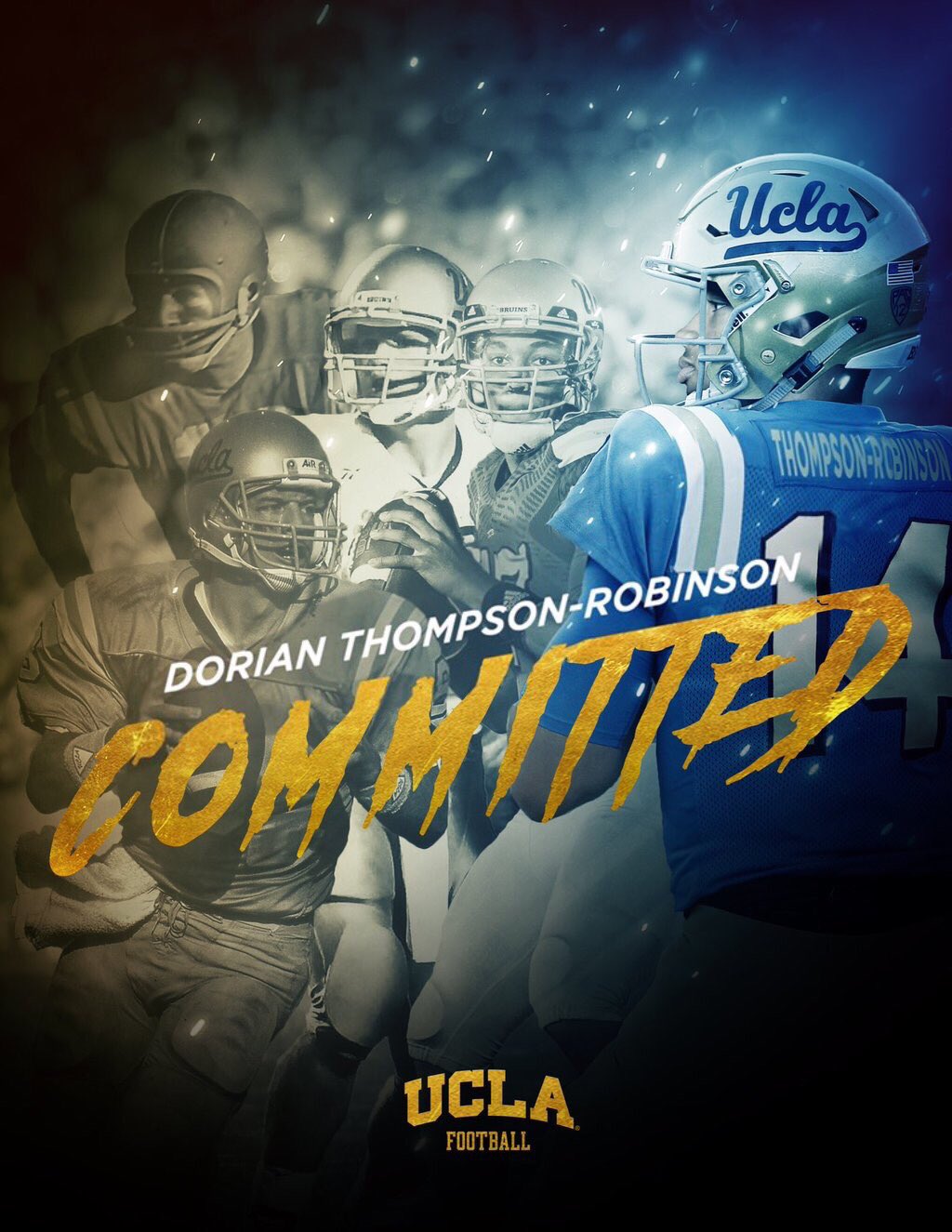 Thompson-Robinson, ranked as the No. 3 dual-threat QB and No. 36 player overall in the Class of 2018 by the 247Sports Composite, has always made it clear his academics are just as important – if not more – than his football career. An aspiring dentist, Thompson-Robinson admits he would love to be playing on Sundays in the future, but took a good look at the big picture when making his decision.

According to the website startclass.com, three of the top four rated dental schools were on the final list of seven he released last month, with UCLA ranked No. 1.

“Academics is something I’ve always pushed upon myself. Life after football should be the biggest part of your decision,” Thompson-Robinson said. “I felt I needed a good school to prep me for my future in dentistry.”

Thompson-Robinson chose UCLA over Michigan, where he visited last week and attended the spring game. The highly touted gunslinger said he was in awe by the reception he received at the game and around campus, and said the Wolverines have some of the best fans he’s ever seen, but his heart has been with the Bruins since his sophomore summer.

MORE RECRUITING: No. 3 overall player in 2018 decommits from Penn St.

“I fell in love with it from the first time I visited there,” said Thompson-Robinson of UCLA. “I was really fighting to get that offer, but I had to push all last summer and I finally got it. After I did their camp, they extended their offer to me and I knew that’s where I wanted to be.

“They pushed and fought for me, and made me do the same, and I liked that. Their program is also up and coming and they play top competition every year. It’s a great fit for me.”

It didn’t hurt, either, that Jedd Fisch is the offensive coordinator for the Bruins. He served as the quarterbacks’ coach, wide receivers coach, and passing game coordinator at Michigan before being hired away by UCLA. He also was the main person in pursuit of Thompson-Robinson, who is also attracted to the scheme Fisch has planned for him.

“It’s a Sunday offense, similar to what is run in the NFL, and obviously, I would love to get into the NFL, and this would prepare me for it,” said Thompson-Robinson, who insists he didn’t talk to coaches on a regular basis, limiting his contact with them during the school year, as he didn’t want it to be a distraction. “But to be clear, I was never going to commit to a school – and didn’t – because of one coach. Him being there is just icing on the cake.”

Thompson-Robinson knows he’ll have to compete for the starting job, but is confident he’ll be able compete right away.

Thompson-Robinson’s announcement Sunday, and teammate Brevin Jordan’s announcement last week that he would attend Miami, brought an end to speculation the dynamic duo planned to attend the same school.

Many believed because the two attended the Michigan spring game together, they’d be playing alongside one another in college.

“At one point, during our sophomore summer, we both had our minds set on committing to UCLA and we were going to do so through a national media outlet,” Jordan said. “But we just pulled away from the idea. I loved UCLA, but after taking my trip to Miami earlier this month, I fell in love with it and I knew that’s where I wanted to be.

“It would have been nice to continue my career with my quarterback, but at the end of the day we have to do what’s best for ourselves.”

The quarterback-tight end duo still has one last task on their hands, along with wide receiver Jalen Nailor, and that’s to extend Gorman’s 54-game winning streak next season, and aim for a fourth straight Super 25 title.

While Thompson-Robinson will make the switch from starting wide receiver and second-string quarterback next season, Nailor is back after leading the team with 51 catches for 936 yards and 14 touchdowns, while Jordan caught 27 passes for 501 yards and had nine touchdowns.

In two seasons as a backup to Tate Martell, who recently played in Ohio State’s spring game, Thompson-Robinson completed 32 of 48 attempts for 448 yards and four touchdowns. He has a career QB rating of 115.6. As a receiver the last two years, he hauled in 27 passes for 451 yards and has eight TDs.

Both Jordan and Nailor said UCLA is fortunate to get a player like Thompson-Robinson, not only because of his strong arm and precision-like throws, but because of the respect and demeanor he brings to a program, both on and off the field.

“He knows that he’s one of the best quarterbacks in the country, but he stays humble about it,” Nailor said. “He keeps a great mindset and stays focused on the task at hand. I’m looking forward to another journey, with another leader. He shows every day in practice how much of a leader he can be, and that’s going to carry us.”

Said Jordan: “It’s his passion, that’s what makes him so great. You can see how much pride he’s taken during the offseason, whether it’s on the field or lifting weights, he never stops working. You can just tell how much pride he is taking in all this – preparing for our senior season.

“On the field, we will be confident and we have to be a little cocky. But off the field, we have to set a higher standard for ourselves. We carry ourselves with a lot of pride and humility because you want to set a good example for little kids who follow us on social media.”

Thompson-Robinson said he’s always been raised to have confidence himself, while remaining humble with everyone.

“Growing up and having the right people around me, especially going to a school like Gorman, where everyone is good, it sort of brings you down to earth, and that’s the way I was raised,” he said. “I always told I was going to be something special, and with that came my family keeping my head on straight. Right now, I’m thankful for everything I was ever told or taught, and feel blessed that I’ve made the best decision for me.

“Now I’m ready to go after one more state and national championship.”