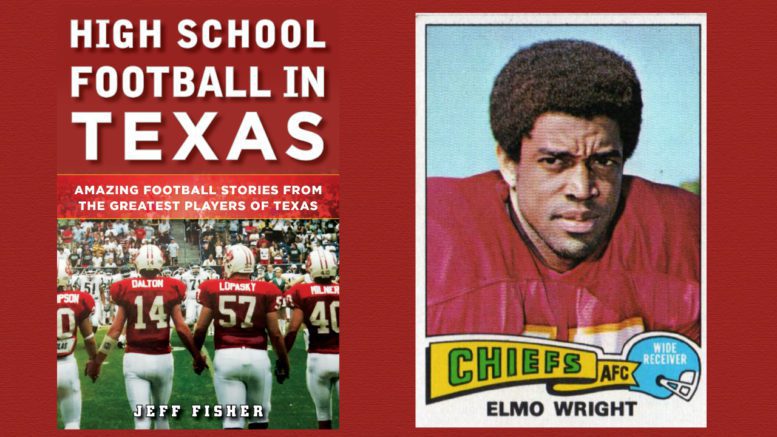 Elmo Wright,the man who invented the end zone celebration, is headed to the College Football Hall of Fame in Atlanta, Georgia. Wright is one of 19 people named to the Class of 2020 Wednesday by the National Football Foundation.

As an All-American wide receiver at the University of Houston, Wright was known to high-step into the end zone at the end of long touchdown receptions. Wright talked about his TD celebration when I interviewed him for my book High School Football in Texas — Amazing Football Stories From the Greatest Players of Texas.

Wright’s rise to the College Football Hall of Fame began during his junior year at Carver High School in Sweeny, Texas. Incredibly, Elmo didn’t go out for football until his junior season. Before that, Wright was focused on a musical career as a tenor saxophonist.

During my interview with Wright for the book, he remembered the first time he stepped into a high school football huddle at Carver. Below you can listen to that moment in Elmo in his own words.

Wright won two state championships in just two years of playing football. In 1965, Wright won a state title at Carver High School during segregation and then the following year at Sweeny High after desegregation.

Below is Wright’s bio from the National Football Foundation’s news release:

During an era when Houston ranked among the nation’s leaders in rushing, Elmo Wright managed to leave his mark as a receiver and remains in the top five of nearly every receiving category in school history. He becomes the third Cougar player elected to the College Football Hall of Fame.

A consensus First Team All-American in 1970, Wright was named the Touchdown Club of Columbus Player of the Year after leading Houston to a No. 19 final ranking. He earned Second Team All-America honors in 1969 after leading the NCAA with 14 touchdowns and guiding the Cougars to a No. 12 final ranking and a win over Auburn in the Astro-Bluebonnet Bowl. In 1968, Wright helped Houston finish at No. 18 while earning Honorable Mention All-America honors and setting a still-standing NCAA single-season record with eight touchdown receptions of 50 yards or more. His 111.6 career receiving yards per game were the second most in FBS history at the end of his career and still rank 12th all-time.

Fifty years later, Wright still owns five Houston records – all-purpose career average yards per play (21.0), yards per reception in a season (27.9 in 1968), yards per reception in a career (21.9), 200-yard receiving games in a season (2 each in 1968 and 1969) and 200-yard receiving games in a career (4). He posted career marks of 34 touchdown receptions and 3,347 receiving yards, which rank second and fourth in Cougar history, respectively. Wright also sits second in Houston annals for 100-yard receiving games (15) and 1,000-yard receiving seasons (2) while placing third in both single-game receiving yards (262 vs. Wyoming in 1969) and single-game touchdown receptions (4 – two occasions). He led College Football Hall of Fame coach Bill Yeoman‘s Cougars to upsets over No. 17 Ole Miss in back-to-back seasons, and he scored twice in the team’s historic 100-6 win over Tulsa in 1968.

A first-round pick in the 1971 NFL Draft, Wright played for the Kansas City Chiefs from 1971-74 before splitting the 1975 season between the Houston Oilers and New England Patriots.

Now retired, Wright earned an MBA after his football career and worked for more than 25 years for Harris County in Houston. He has been involved with the YMCA and served as a mentor for students in the University of Houston’s C.T. Bauer College of Business. Considered by many to be the inventor of the end zone dance, Wright is a member of the University of Houston Athletics Hall of Honor and the Texas High School Football Hall of Fame.

The Turnaround – Realignment and scheduling