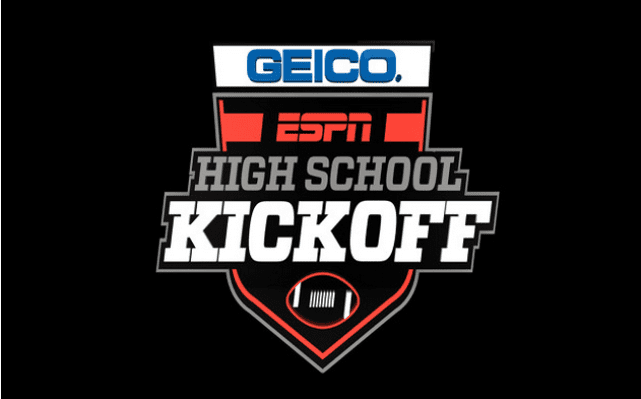 Are you ready for some high school football?  ESPN is with the release 2016 GEICO High school Football Kickoff Classic television that will give fans ten games over three days between August 26th and the 28th.

The two-time defending Georgia AAAAAA champs, who lost plenty of talent from last year’s championship team, bring a 30-game win streak into the contest.  American Heritage got as high as #14 in our national rankings before losing in the second round of the Florida Class 5A playoffs.

Headlining the three days of football are two games that will feature four teams that will begin the season in the High School Football America Preseason Top 25 National Rankings that will be released on August 1st.

In Georgia, Grayson will square-off with IMG Academy (Florida) on ESPN2 on Saturday, August 27th.  Currently, twelve of IMG’s players are listed on the ESPN 300, including defensive end Robert Beal, the fifth best overall college propect and #1 DE in the nation according to the “worldwide leader in sports.”  Grayson, which we previewed earlier this year, has five players in the ESPN 300, including DeAngelo Gibbs, who is ranked as the 10th best prospect overall and #2 Athlete.

Right around the time that Grayson and IMG ends, two-time USA Today “mythical” national champ Bishop Gorman will square-off with Texas-power Cedar Hill in the Lone Star State on ESPN2.

Bishop Gorman, which finished #4 in the High School Football America Top 25 last season, will bring a 39-game into the game, along with a ton of future college talent.  The Gaels are led by quarterback Tate Martell, who gave his verbal to Ohio State last month.  In all, BG has five players listed on the ESPN 300.

Cedar Hill will be looking to make amends for a 2015 season that came to an end too soon, in many Longhorn players’ and coaches’ minds.  The three-time state champs were beaten by Southlake Carroll in the opening round of the playoffs.  The Longhorns return plenty of offensive firepower, led by Notre Dame verbal commit Avery Davis at quarterback.  Davis is ranked #140 on the ESPN 300.

Early in the day on Saturday, St. Edward from Ohio, which finished #6 in our national rankings in 2015, will take-on Pine-Richfield from western Pennsylvania.  The two-time Ohio Division 1 champs will be charged with shutting-down junior dual-threat quarterback Phil Jurkovec, who has already given his verbal to Notre Dame.

Also on Saturday, St. John Bosco from California, which finished #8 in last season’s High School Football America National Top 25, will travel to Ohio to face St. Xavier.  Both teams have two players ranked in the ESPN 300.  The game will give Ohio State Buckeye fans an up-close look at Bosco lineman Wyatt Davis, who a week ago gave his verbal commitment to the Buckeyes.  St. X is led by quarterback Sean Clifford, who’s given his verbal to Penn State.

Below is the list of all ten games that will air on the ESPN family of networks: