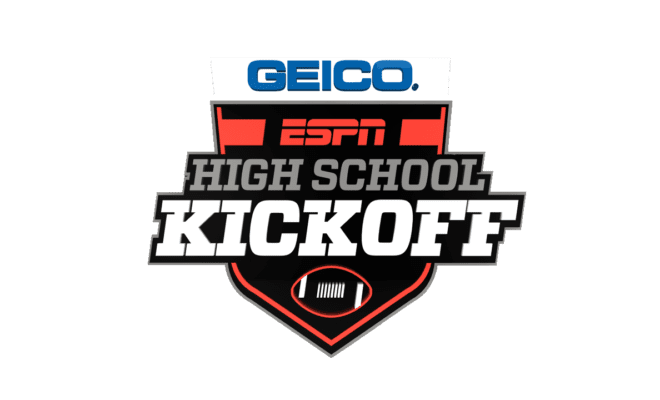 This weekend is a fantasy one for lovers of high school football. ESPN and its family of networks will air seven games between Friday and Sunday in the GEICO ESPN High School Football Kickoff. 11 of the 14 teams teams involving are ranked in the latest High School Football America 100.

It all kicks-off tonight starting at 6 P.M. Eastern with two head-to-head HSFA 100 matchups. No. 19 Warren Central (Indiana) travels to Kentucky to take-on two-time defending 6A state champ Trinity, which is currently ranked No. 64. The Shamrocks entered the season ranked No. 22, but tumbled after losing to Carmel (Indiana) last week, which snapped the Rocks 30 game win streak.

The nightcap of the doubleheader will feature top-ranked Mater Dei (California) and No. 10 Bishop Gorman (Nevada). This will be the season-opener for the 9-time Nevada state champs, while Mater Dei will be playing its second game. The Monarchs beat Bishop Amat (California) last week, but they bring an 0-1 record into the game, because they had to forfeit the victory after using an ineligible player.

The forfeit doesn’t affect MD in the rankings, because the player didn’t have an effect on the outcome of the game on the field.

Both Friday night games will be on ESPNU.

Saturday starts on ESPN in Alabama with No. 6 Hoover taking-on Pinson Valley, which is just outside of the Top 100 national rankings. It’s a showdown between last year’s 7A and 6A state champs.

The second game will also be on ESPN and it will also be played at Hoover’s Metropolitan Stadium. No. 28 Hewitt-Trussville (Alabama) will take-on a Cedar Grove, which is ranked No. 13 in the Georgia Top 25.

Saturday night at 6 P.M. on ESPNU, No. 5 Grayson (Georgia) hosts 2017 6A semifinalist Tucker, which opened its season lost week with a loss to No. 55 Buford (Georgia). This is the season opener for the Rams.

Everything wraps-up on Sunday at 12:30 P.M. with a clash of defending state champs. Ohio Division I champ Pickerington Central, ranked No. 11 in our Top 100, takes-on Illinois 5A champ Phillips Academy, ranked No. 62 this week. Phillips Academy, an inner-city Chicago team, has won two state titles in three years.

Big Battle in Alabama Top 10 high school football rankings with No. 1 Thompson squaring-off with No. 3 Hewitt-Trussville