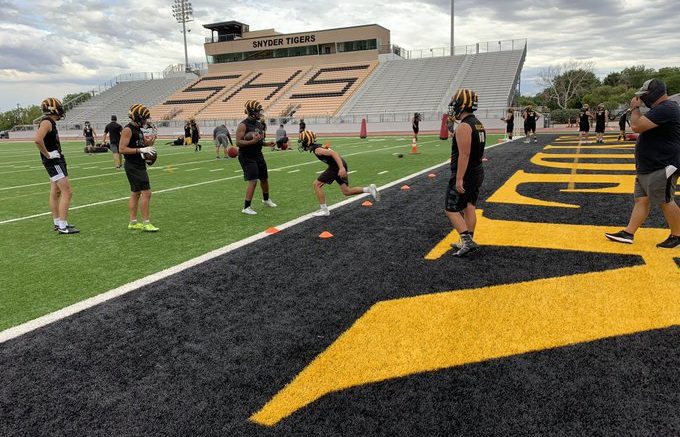 High school football in Texas is underway…albeit just the schools in the four smallest classifications. While the 4A, 3A, 2A and 1A schools are now officially getting ready for the opening of their regular seasons at the end of the month, the two biggest classifications (6A and 5A) are on the sidelines waiting for the start of their Fall practices on September 7.

To celebrate, take a look at some of the tweet from around the Lone Star State below:

Coach Bill Elliott working with the big boys today as 4A @CHSbobcats got back on the field for first time today. Hear from couple players and how they stayed in shape over summer. @celina_football @MikeDoocyFox4 @KDFWsports #txhsfb pic.twitter.com/m29F71Tndb

Check out some of the sights and sounds from @WESEEREDFB first day of practice. #txhsfb @UIL_AD

And we back. Footballs are flying around the Sealy High practice field once again on a cool morning to begin fall sports practices. Tiger masks are aplenty @SealyNews #TXHSFB pic.twitter.com/cynlJT6WFU

Quote of the morning from @ArgyleGridiron head coach @ToddRodgers13 — “Championship teams are teams that usually merge [discipline and athleticism]. And I think we have that type of chemistry to merge those two this year.” #DentonRC #txhsfb pic.twitter.com/XorJ4Wh650

Up before the sun at Greenwood High School for the first day of football practice for 1A-4A schools #txhsfb pic.twitter.com/SJ5rurZv1T

Second stop for this year’s #TXHSFB two-a-days coverage is the Memphis Cyclones! pic.twitter.com/2aZExb45zK

Under head coach Wes Wood, the Snyder Tigers continue practice as they go through run defense in their first day on the field. #txhsfb pic.twitter.com/fD0CpLbdvZ

Out at (@farmer_football) for Day 1 of fall practice. The Fightin’ Farmers are coming off a 2-9 season, but enter their 3rd season with Brandon Hankins as their head coach.

“They do a good job of doing what they’re supposed to do.” #txhsfb pic.twitter.com/NTiPuj3VaL

The first sights (👀)and sounds (🗣️) of the 2020 season comes from the Sinton Pirates. Be on the lookout for the Pirates’ preview this week!@Kiii3Sports #3SportsBlitz #txhsfb pic.twitter.com/XQMJXIO2Um

Despite all the negativity in 2020 and talk of cancellations, we have football! It’s so nice to see some helmets strapped on! The Sweetwater Mustangs fill the Mustang Bowl for the first day of practice. #txhsfb pic.twitter.com/q4oTKtpxGD

The Snyder Tigers get their first reps of the season at Tiger stadium starting with a defensive circuit. #txhsfb pic.twitter.com/lC9KTa2jUj

Hal Wasson out at Southlake Carroll