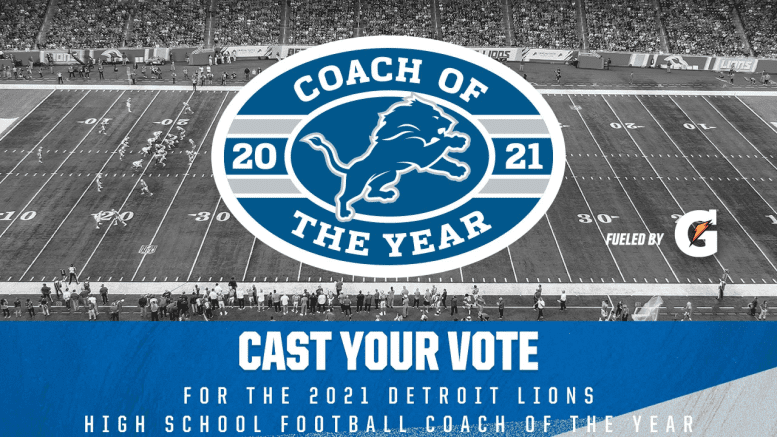 The National Football League‘s Detroit Lions are giving fans a say in the winner of the 2021 Detroit Lions Coach of the Year award. Between now and Saturday (November 27), fans can cast their vote for eighteen finalists vying for a $3,000 donation to his school’s football program. In addition the winner will be the Lions nomination for the Don Shula NFL High School Football Coach of the Year award.

The finalist are the 16 coaches playing for state championships Friday and Saturday at Ford Field, home of the Lions, plus the two 8-man state champs.

In the case of a tie, the Detroit Lions’ Director of Football Education will be the deciding vote.

During each week of the nine-week Michigan high school football regular season, the media panel (above) also selected a Lions’ Coach of the Week. The winner is saluted for developing his players’ character, discipline, and football skill, in addition to emphasizing player health and safety.

All winners received a certificate signed by Lions’ head coach Dan Campbell and National Football League (NFL) commissioner Roger Goodell as well as acknowledgement at an in-game ceremony on December 19 when the Detroit Lions take on the Arizona Cardinals.