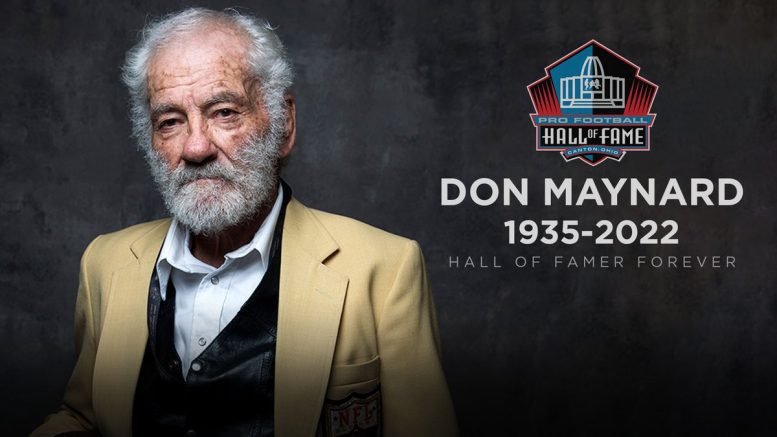 I talked with the New York Jets great in 2018 when writing my book, High School Football in Texas: Amazing Football Stories From the Greatest Players of Texas. Maynard was 83 when we spoke.

During the interview, he mentioned how much fun he had reminiscing about his high school days that were spent at five different high schools, because his family moved quite a bit due to his father’s job.

Don had a blast going into the corners of his memories to talk about beginning his high school career playing 6-man football at a school that was about 13 miles away from his home.

To honor Don, I thought it would be fun to re-print his chapter from my book in its entirety below:

At eighty-three years old, Pro Football Hall of Fame wide receiver Don Maynard still chuckles at the difference between the tiny Texas towns he lived in compared to his first trip to New York City. He began his career with the New York Giants before moving on to being an All-Pro receiver for the New York Jets and its celebrity quarterback Joe Namath.

“I remember getting off a bus for the first time in New York City, and I looked up and saw more bricks in one building than some of the entire towns that I lived in growing up,” said Maynard in his thick Texas drawl.

Donald Rogers Maynard was born on January 25, 1935, in the small town of Crosbyton, Texas, which according to the 2010 census has a total 1,741 residents, located east of Lubbock. Maynard recalled that his childhood was filled with plenty of moving around.

“My dad worked in the cotton business, running a cotton gin that he managed,” recalled Maynard. “We moved a lot. I think I went to thirteen different schools. May dad was very influential in my life.”

Maynard said his dad was a very hard worker and never actually saw his son play football until he was a junior in college at Texas Western University, which is now the University of Texas at El Paso, otherwise known as UTEP.

From as far back as Maynard can remember, he was always the fastest kid in whatever community he lived in.

“I really loved running track,” said Maynard. “I loved to run, and that helped me playing football. I remember playing games with my friends in the neighborhood on vacant lots.”

When it was time to go to high school, the Maynard’s lived in a rural area about 50 miles west of Lubbock. Maynard attended the Three Way Independent School District, which was named that because it combined three independent school districts into one, but Maynard says there were actually five little schools in the district. At one point, the district encompassed an amazing 352 square miles.

Maynard said getting to school was a chore unto itself. “I lived 13 miles from the school, but the way the bus route was going home, it was very roundabout and I think my ride was about 25 miles.”

The Three Way School was a 6-man high school football team when Maynard began playing varsity football. For those unfamiliar with 6-man football, it was created during the Great Depression in 1934 in Nebraska as an alternative for schools that didn’t have enough students to play the 11-man game. Colorado, Kansas, Montana, Nebraska, Oklahoma, Oregon, and Texas still offer 6-man football, which is played on a field that is 80 yards long and 40 yards wide. All six players are eligible receivers in the scaled-down version of the game.

“I think back then we had about ten players on the team,” said Maynard. “Of course, back then you played both ways. I think I played a little quarterback then, but mostly I was a halfback. To be honest, I don’t remember much about the actual games, but I do remember I loved playing football.”

We are devastated to learn of the passing of @profootballhof WR Don Maynard.
We remember Don's records set on the field as well as his many contributions to our charitable efforts off the field. RIP pic.twitter.com/SrFAnzN5Fi

For his junior season in 1951, Maynard and his family moved to Colorado City (with a population of around 4,000), which was a little bit bigger than Don was used to.

“I really enjoyed my time at Colorado (pronounced kol-uh-raid-oh),” said Maynard. “I remember playing football, basketball, and running track. But, I’ve got to be honest with you, my state championships in the low and high hurdles stand out more than what I did on the football field.”

Many called Maynard a one-man track team because, aside from the individual and relay running events, he was very good in the long and broad jumps.

As far as on the football field in 1952, Maynard played halfback in Colorado’s Wing-T offense and a cornerback/safety on defense. He said he especially loved the defensive side of the ball.

“My claim to fame in high school was defense,” said Maynard. “I would just sit back there and I was kind of tall, which together with my ability to read a formation made me a pretty good player. Knowing which way the other team was going to go out of different formations allowed me to pursue a ball carrier or knock down a pass.

“I like to think that the fact that I was fast made all of the difference in the world,” Maynard added. “And if you’re a good listener and pay attention, you can be a pretty good player. I believe I learned the game very well.”

Maynard’s best game may have been against Winters High School, nicknamed the Blizzards, in early October. He began the game with a 75-yard kickoff return for a touchdown. The speedy tailback then had an 81-yard catch and carry to tie the game at the half ,14–14. Maynard then capped the game with his third touchdown on a one-yard run, which gave Colorado City a 21–20 win after the extra point.

The 1952 football season ended with Colorado City beating Merkel, 12–7, which gave the Wolves a 5–5 record without a playoff berth. Maynard said he remembered that final game because he was named Wolverine Sweetheart, along with a young lady who was named Sweetheart of the Team. Capping the season was Maynard’s selection to the District 5-AA All-District Team.

In the spring of his senior season, Maynard put his outstanding speed to work in the University Interscholastic League’s Class A state track and field championships, winning the 180-yard low hurdles in a record time of 19.4 seconds. He also captured gold in the 120-yard high hurdles.

We reflect on the career of Hall of Famer Don Maynard. He was a resilient man on and off the field – and someone that his teammates could always count on.#HOFForever pic.twitter.com/TEpOVD1NAZ

After high school, Maynard headed to Rice Institute, now Rice University, but didn’t enjoy his time in the Houston area.

“I think I came home five times during the first semester and I didn’t come home to visit, I came home to stay,” chuckled Maynard. “But my dad said that I needed to get an education. So I went back all of those times and finally transferred to Texas Western, which is now the University of Texas at El Paso. The good thing was that in El Paso I got a roommate from high school, so that worked out real well.”

At UTEP, Maynard continued to show his all-around skills on the football field. He only caught 28 passes there, but averaged 27.6 yards per catch with ten touchdowns. As a running back, Maynard averaged 5.4 yards per carry. He finished his career with 2,283 all-purpose yards, which included his outstanding kickoff and punt returning skills. He also continued to perform well in the defensive secondary with ten career interceptions.

Maynard was selected in the ninth round of the 1957 NFL Draft by the New York Giants, but was released after only one year with the team. After an unsuccessful stint in the Canadian Football League, he signed with the New York Titans of the upstart American Football League. The Titans would be renamed the New York Jets several years later. In 1965, Maynard and “Broadway Joe” Namath began a pitch-and-catch relationship that would culminate with the Jets upsetting the Baltimore in Super Bowl III, 16–7, which marked the first time that an AFL team beat an NFL team in the Super Bowl.

In the end, Maynard retired as the NFL’s all-time leading receiver with 633 receptions for an average of 18.7-yards per catch. He no longer holds the record, but was inducted into the Pro Football Hall of Fame in 1987.