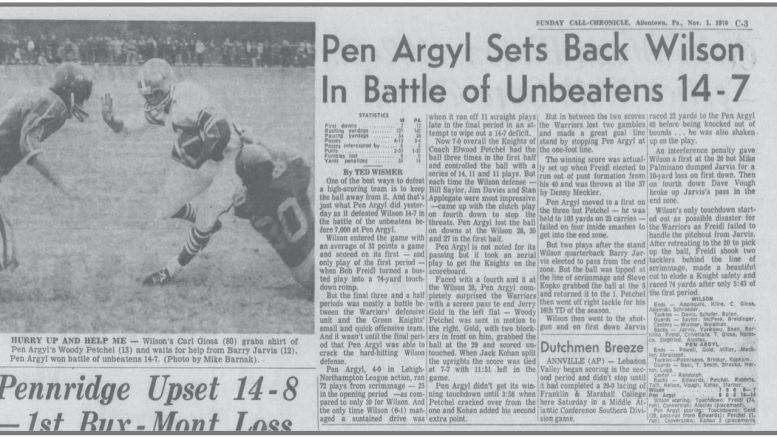 After weeks of writing mostly coronavirus pandemic high school football stories, I decided that it was time to return to my weekly column called First & Fisher that I began writing when we took High School Football America to Los Angeles in 2012. The idea behind the column is to give my perspective on the sport that I began covering professionally in 1974. Fred Anderson of WEST-AM radio in Easton, Pennsylvania allowed me, just a teenager, into the press box at Easton’s Cottingham Stadium to keep statistics for Easton High School football games.

For the return of First & Fisher, I’m going to focus on my first-ever high school football game on Halloween 1970.

This game is probably the main reason I love high school football the way I do. It was a battle of unbeatens between Wilson, my soon to be high school, and Pen Argyl. The game was played in Pen Argyl, which to this day, like my alma mater, doesn’t have stadium lights. Both schools still play high school football in the Saturday sunshine.

I remember the build-up to the game was intense in my community with our hometown Wilson Warriors dreaming of a Lehigh-Northampton League championship. And, my interest in the game was heightened by a $1 bet with my grandmother on who would win.

My grandmother lived the Pen Argyl School District and loved to watch the Green Knights’ star junior running back Woody Petchel, who was well on his way to a career that saw him leave the school as Pennsylvania’s all-time leader in touchdowns (79) and points (486). Of course, for the bet, I took my Warriors, while she was rooting for the Green Knights.

I remember it was an overcast day as I entered Alumni Stadium that day packed with 7,000 fans. The fan fact comes from The Morning Call newspaper, which I’m using as a reference to fill-in the gaps from when I was 10-years old. However, I can say that as I re-read the nearly 50-year old story, many of facts matched my memories of that day.

One of my most vivid memories was the fact that all of the fans were sitting on the same side of the field and you could feel the energy. To this day, Pen Argyl doesn’t have many seats on the visitor’s side of the field. In fact, I don’t believe that the Green Knights had any on that side in 1970.

We sat up near the press box and I remember the incredible view of the mountains in the distance. Below you can see a picture I took during a game I covered there in 2010. It’s quite the vista.

Another memory that I had was the fact that my Warriors jumped-out to the lead, making me feel like I was going to be a dollar richer by the end of the game.

When I checked the newspaper account, I in-fact was right that Wilson led 7-0 after its very first offensive play of the game when speedster Rob Friedl raced 74-yards for a score. A fact that I didn’t recall is that it was Wilson’s only play of the first quarter as the Green Knights chewed-up the clock with its ground game, running 25 plays in the first quarter to the Warriors’ one play.

Wilson held on to that 7-0 lead going into the fourth quarter. Pen Argyl tied the game at 7-7 early in the fourth quarter when the Green Knights did something unusual…they thew the football. I say unusual, because in their first six games, they only threw for a total of 87 yards.

With a 4th and 8 at the Wilson 28, Pen Argyl used a screen pass that resulted in Jerry Gold scoring the Green Knights’ first TD. The newspaper account notes that Pen Argyl Green Knight head coach Elwood Petchel used his son as a decoy by sending him in motion.

Petchel eventually scored the game-winner from 1-yard out with 3:58 to go in the game. It was a busy day for the younger Petchel, who would go on to play at Penn State, with 35 carries and 103 yards.

While Pen Argyl won 14-7, what may have gotten me addicted to the great game of high school football was a last minute drive that got Wilson close to tying it up.

I remember the entire crowd on its feet as a Wilson pass toward the end zone fell to the ground and I felt a ton of disappointment. According to the account of the game, quarterback Barry Jarvis’ touchdown pass attempt was broken-up by David Vough in the end zone with under a minute to play.

While I was disappointed and a dollar poorer, I knew there-and-then that high school football would always hold a special place in my heart.

If you remember your first-ever high school football game, please feel free to share it with us on Twitter @HSFBamerica. I’d love to hear about your memories.