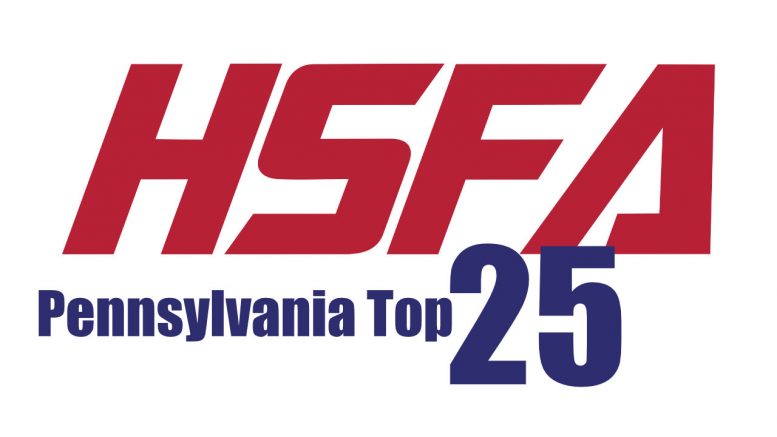 To say it’s difficult to produce a statewide High School Football America Pennsylvania Top 25 during the coronavirus pandemic is an understatement. However, we’re going to try to do so, even though some teams are still waiting to hit the gridiron.

As always, we’re using our proprietary algorithm to produce the Top 25, but it may take a couple of weeks for things to settle-in. The algorithm wasn’t built for football during times like these.

At the top of the rankings is St. Joseph’s Prep, the two-time defending 6A state champs. Before the coronavirus pandemic shut-down virtually all high school football interstate games, the Hawks were going to play one of the toughest non-league schedules in the nation.

In fact, the Hawks would have been ranked No. 2 in the Preseason High School Football America 100 had we not cancelled it because of all of the schedule changes. Our first in-season Top 100 will be released on October 4.

SJP is loaded with talent, starting with Ohio State-recruit Kyle McCord, who was sidelined during his school’s title run due to a knee injury he suffered in the Philadelphia Catholic League championship game. Before the injury, McCord threw for 2,399 with 31 touchdown passes.

McCord’s favorite target is Marvin Harrison, Jr., who has also given his verbal to Ohio State. On the other side of the ball, linebacker Jeremiah Trotter, Jr. has given his verbal commitment to Clemson. Both players are sons of former NFL players.

Early on Friday, St. Joe’s and fellow Philadelphia Catholic League programs learned that league officials turned-around their earlier decision to play football in the Spring sports season. SJP had already decided to move forward in the fall, but the new was very good for defending 5A state champ Archbishop Wood, which now enters this first statewide ranking at No. 17.

Helping to settle-down the algorithm this week is the fact that the Mid-Penn League begins play. We’re still waiting for the Suburban One League in the southeast part of the state to start playing. The SOL is scheduled to begin October 2.