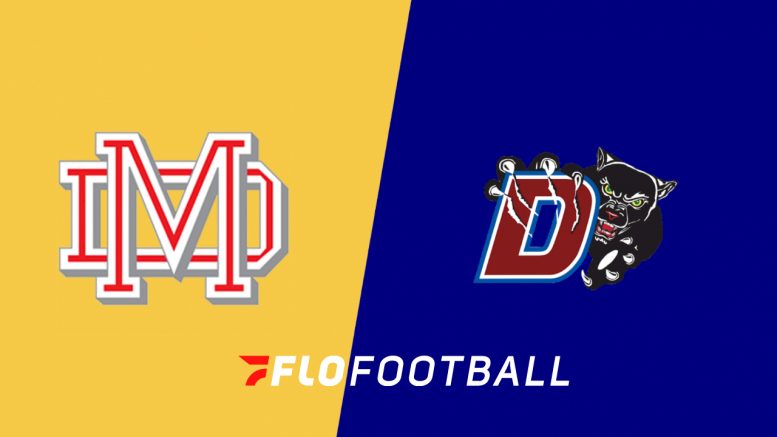 If you’re not lucky enough to get to Duncanville, Texas for Friday’s showdown between two-time national champ Mater Dei (Santa Ana, California) and Duncanville, FloFootball and Prep Gridiron Logistics have you covered.

The game between national powers will air at 7:30 P.M. Central Time Friday night.

Watch the game LIVE on FloFootball at this link

The game between the No. 1 and No. 14 teams in the High School Football America 100 will be the season opener for both squads. Mater Dei was scheduled to play its season-opener against Corona Centennial (California) last Friday, but that game was turned into a scrimmage after CC wasn’t able to meet the 10-day practice requirement due to COVID-19 protocols.

Highlights from the Scrimmage vs Mater Dei! pic.twitter.com/d3Hf12KrZD

The 2021 season is a quick turnaround for Mater Dei, which played a five-game spring season after California prevented schools from playing in 2020. The Monarchs were a perfect 5-0 in the spring, capturing the Trinity League championship.

However, California didn’t allow playoffs in the spring, which meant that MD had to settle for a league championship and a No. 7 ranking in the combine 2020-21 High School Football America 100 powered by NFL Play Football, the NFL’s initiative to provide fun and engaging experience for players of all ages and skill levels.

Duncanville is coming-off a 10-2 season. The Panthers, who lost to Southlake Carroll in the 6A Division I state semifinals last year, made it to the state title game in 2018 and 2019. They lost both times to North Shore.

Mater Dei, the preseason No. 1 in the High School Football America 100, is led by another young quarterback. In the spring Elijah Brown became just the fourth freshman to take control of head coach Bruce Rollinson’s offense. The other three are current Georgia QB JT Daniels and future NFL quarterbacks Matt Barkley and Todd Marinovich.

In the abbreviated spring season, Brown completed 74 of 102 passes for 973 years with 15 touchdowns against only one interception. His quarterback rating was 133.3, according to his stats on MaxPreps.

Four of the top seven players in the 247Sports.com California Class of 2022 Composite Rankings wear Mater Dei red and white.

Cornerback Domani Jackson, who has already given his verbal to USC, is the top player in California. He’s ranked as the No. 5 overall college football recruit in the country.

Linebacker David Bailey is considered the No. 5 recruit in the state. He’s a 4-star recruit with 12 scholarships offers.

Brown has plenty of offensive weapons, starting with C.J. Williams, the No. 12 wide receiver prospect in the nation. Williams caught 15 passes in the spring with five touchdowns. He averaged 14.5 yards per catch. He’s given his verbal commitment to Notre Dame.

Oklahoma-bound running back Raleek Brown will give the offense balance. The No. 2 prospect in California averaged 6.9 yards per carry in the spring. He found the end zone five times. He also caught five passes.

Duncanville head coach Reginald Samples has led the Panthers to a 50-5 mark over the past five years.

The explosive MD offense will be tested by a very good Duncanville defense. The Panthers are led by defensive lineman Omari Abor, the No. 6 recruit in the state. The Panthers have three other defensive players in the Class of 2022 Top 100 — linebacker Jordan Crook (No. 81), safety Pierre Goree (No. 83) and defensive lineman Quincy Wright (No. 87). Junior corner Deldrick Madison is the No. 30 recruit in the Class of ’23.

On offense, the Panther O-Line is strong with Jaylen Early, the No. 35 recruit in the state, who has given his verbal to Florida State and Oregon-recruit Cameron Williams, the No. 60 college prospect in the Lone Star State.

FloFootball will broadcast three games on Saturday. All three will be head-to-head matchups in the High School Football America national rankings.