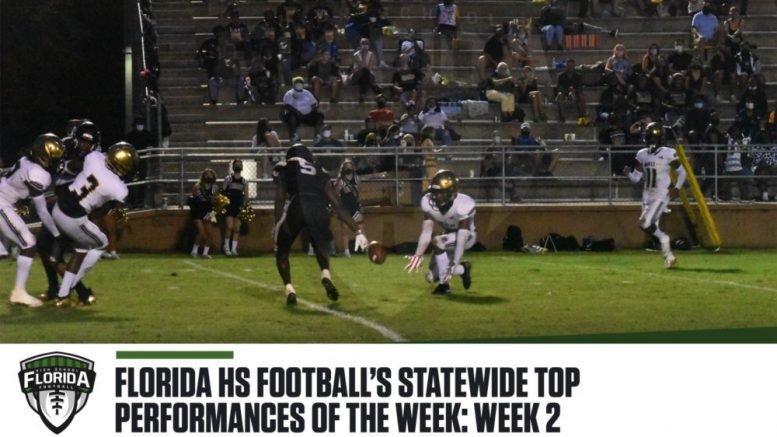 Oakleaf cornerback Trey Thomas goes in for his first of two interceptions of the night in the Knights' 35-14 win over Buchholz on Friday, Sept. 11, 2020 at Citizens Field in Gainesville. [PHOTO: Joshua Wilson/FloridaHSFootball.com]

By Joshua Wilson, founder of FloridaHSFootball.com

We have made two weeks into the 2020 season with the COVID-19 pandemic and again we had some standout performances among those that competed last week across 11-man and 8-man football. Check out who made the list of FloridaHSFootball.com’s Statewide Top Performance for Week 2.

RB Joe Brunson, Baker – Brunson had another huge game, carrying the ball 24 times for 229 yards and two touchdowns in the Gators’ 62-28 win over South Walton.

RB Scooby Graham, Baker County – Only had 72 yards rushing, but the senior back was responsible for three of the Wildcats’ touchdowns in their 49-0 win over Orange Park.

RB I’jon Richardson, Bishop Snyder – Rushed 113 yards and a touchdown for the Cardinal in their 12-0 win over Rocky Bayou Christian.

LB Jamarion Neal, Bloomingdale – Scored a touchdown on a fumbler recover in the end zone and the game-sealing interception in the Bulls’ 15-14 stunning win over Armwood.

DL David Adewale, Bolles – Collected a game-high three sacks for the Bulldogs in their 36-12 thumping of Trinity Christian (Jacksonville).

RB Kade Frew, Bolles – Had 135 yards rushing on 22 carries and scored twice in the Bulldogs’ 36-12 win over Trinity Christian (Jacksonville).

RB Scoota Trotman, Cardinal Mooney – Had 11 carries for 103 yards on the ground and scored two touchdowns in the Cougars’ 42-7 season-opening win over North Port.

RB Thaddius Franklin Jr., Chaminade-Madonna – Had 29 carries for 171 yards and scored all four touchdowns in the Lions’ 27-14 win over Champagnat Catholic.

QB Dylan Oester, Dunedin – Went 20-of-29 passing for 344 yards and three touchdowns in the Falcons’ 42-26 loss to St. Petersburg Catholic.

RB Myles Montgomery, Fletcher – Carried the ball 32 times for 175 yards and a touchdown in the Senators’ 23-0 win over Terry Parker.

QB Tate Ewing, Foundation Academy – Went 14-of-26 passing for 179 yards and three touchdowns in a 35-21 victory at Mount Dora Christian.

QB Brent King, Gainesville – The junior quarterback had 209 total years of offense and was responsible for both touchdowns in the Hurricanes’ 14-0 win over Santa Fe.

WR Carter French, Jesuit – Had 157 yards receiving on just four catches, which two of them became touchdowns in the Tigers’ 35-21 win over Clearwater

QB Joe Pesansky, Jesuit – Pesansky had another big game going 10-of-17 for 231 yards passing and tossing three touchdowns in the Tigers’ 35-21 win over Clearwater.

QB Will Prichard, The King’s Academy – Prichard went 16-of-28 passing for 281 yards and three touchdown passes in the Lions’ 33-27 victory over Lemon Bay.

K Reese Collins, Lakeland Christian – Went three-of-three on field goals for the Vikings in helping them defeat Seffner Christian 23-0, for their second straight shut out on the young season.

RB Troy Holmes, Largo – Had 19 carries for 218 yards rushing and scored both touchdowns in the Packers’ 31-14 loss to Pinellas Park.

WR Aaron Pasick, Lemon Bay – Had three catches, two of them for touchdowns, and 198 yards receiving in the Manta Rays’ close 33-27 loss to The King’s Academy.

ZJ Jones, Madison County – Jones had five catches for 145 yards receiving and scoring one touchdown in the Cowboys’ 18-13 win over South Sumter.

WR Jaylen Smith, Mandarin – Had four catches for 124 yards receiving and a touchdown in the Mustangs’ 14-0 victory over Atlantic Coast.

QB Walter Simmons III, Oakleaf – Accounted for three total touchdowns (two passing, one rushing) in the Knights, throwing for 159 yards and rushing for 19 more yards in a 35-14 win over Buchholz.

DB Trey Thomas, Oakleaf – Thomas had two interceptions, including one for a pick-six, and six tackles in the Knights 35-14 win over Buchholz.

DL Jordan Jimenez, Pinellas Park – The junior defensive lineman had two sacks which one of them resulted in a fumble he recovered for a touchdown in the endzone in the Patriots’ 31-14 win over Largo.

WR Mario Williams, Plant City – Had 115 yards receiving on just two catches, but made the most of it with both of those catches also being turned into touchdowns while also throwing for one more touchdown and a converted two 2-point conversions in the Raiders’ 44-7 win over Riverview (Riverview).

WR Mike Olkiewicz, Ponte Vedra – Had seven catches for 151 yards and scored two touchdowns in the Sharks’ 24-7 win over Nease.

QB Logan Rogers, Port Charlotte – Completed only 7-of-8 passes for 149 yards, but it was well worth it as four of Rogers passes were for touchdowns in the Pirates’ 56-12 drubbing of DeSoto County.

RB Jakeemis Pelham, Port Charlotte – Had three rushing touchdowns, the longest of 61 yards, for the Pirates in their 56-12 drubbing over DeSoto County.

WR Keymari Odum, Ridge Community – Had six receptions for 154 yards with three of those receptions being touchdowns in the Bolts’ close 42-40 loss to Kathleen.

QB Chris Harris, Sebastian River – Threw for 307 yards and a pair of touchdowns in his first start for the Sharks in a close 29-22 loss to South Fork to open the season.

QB Eli Moore, Southwest Florida Christian – Moore threw for a school-record 455 yards and five touchdowns leading the Kings to a 48-28 victory over Oasis.

RB K’wan Powell, Vernon – Powell only had five carries on the night but rushing for 249 yards and scoring six total touchdowns with three touchdowns on the ground and three through the passing game in the Yellowjackets’ 56-19 drubbing of Port St. Joe.

RB Cornelius Shaw, Victory Christian – Had 284 yards rushing and a pair of scores in the Storms’ 36-19 win over Winter Haven to open the season.

QB Alex Williams, Wewahitchka – The junior quarterback for the Gators’ had a huge night in a 40-6 win over Franklin County rushing for 203 yards on 11 carries, scoring three touchdowns.

RB Nate Rembert, Wildwood – Had 159 yards rushing on eight carries and three touchdowns for the Wildcats while also having three catches for 48 yards and a touchdown in Wildwood’s 42-14 win over St. Joseph