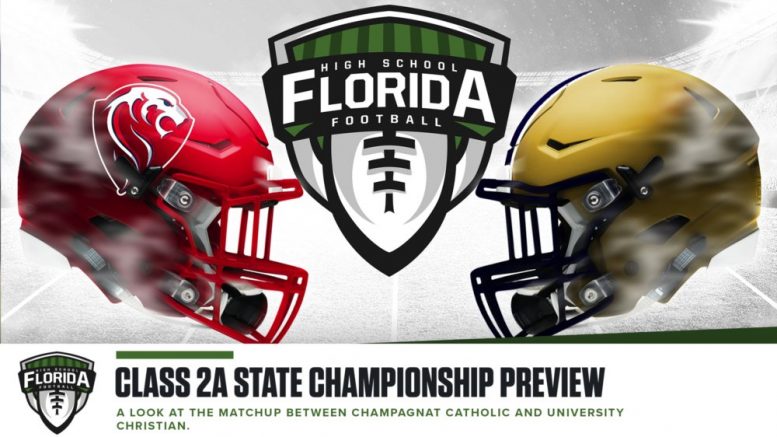 The following is reprinted from FloridaHSFootball.com

LIVE STREAM: via Spectrum Sports – $9.99 viewing fee for those who are not a current Spectrum Subscriber – LINK

NOTES: This is Champagnat Catholic’s fifth appearance in a state championship game in school history as well as their fifth appearance in a state championship game in the last eight years. … University Christian is making the school’s 11th overall appearance in a state championship game in school history and their first appearance in the Class 2A State Championship game since 2017. … Champagnat Catholic won last year’s Class 2A State Championship 35-14 over Victory Christian. … University Christian’s last state championship win came in 2016 in a 24-7 win over Champagnat Catholic. … This will mark the third time that both programs have met in the state championship game. Each has split the previous two meetings going 1-1. … University Christian has won nine state championships in school history which ranks for third-most in the state while Champagnat Catholic has won three state championships. … On players of note for Champagnat Catholic, QB Tyous Taylor has been an impressive 123-of-173 passing for 2,165 yards with 16 touchdowns against five interceptions in 12 games played so far this season while also having 121 yards rushing on 42 carries and three more touchdowns on the ground. … RB Donovan Jones, a two-star Gardner-Webb commit, is a workhorse for the Lions as well having 120 carries and 1,172 yards rushing, and 13 touchdowns through 12 games. … Receiving for the Lions will see the ball shared among three favorite targets of Taylor with Keshawn Brown, who has multiple offers including Maryland, UAB, and Southern Miss, leading the way having 38 receptions for 845 yard receiving and 12 touchdowns while senior Malik Rutherford who is a three-star Georgia Tech commit and junior Benson Prosper are not far off with Rutherford having 32 receptions for 510 yards receiving and seven touchdowns while Prosper has 588 yards receiving on 34 catches and 10 touchdowns. … Defensively for the Lions, the team has only registered 12 sacks through 12 games this season with senior DT Darnell Georges leading the way with four sacks and leads the team with 52 total tackles (27 solo) and 12 tackles for loss. … Other leading tacklers include senior DE/MLB William Jeudy with 45 tackles (14 solo), two sacks, and six tackles for loss while senior DB/OLB Larrion Louis-Welch has 41 tackles (26 solo) and six tackles for loss. … Senior CB Antwan Gisme leads the Lions with four interceptions on the season while freshman SS Corey Gibson is right behind Gisme with three interceptions. … The Lions also have an excellent kicking specialist in Andres Borregales who is a three-star University of Miami commit, having joined the Lions prior to starting this season after being a part of the last several state championship-winning teams at Class 3A Chaminade-Madonna. … Champagnat Catholic has played all their games in 2020 on the road, including all playoff games. … The Lions dedicated this season to Daniel Clavijo who was the defensive coordinator for the Lions in their previous four state championship appearances. Daniel who was the brother of head coach Hector Clavijo III died at the age of 29 in a car accident in June of this year. … Of University Christian players to note, you will find them going to the ground a lot with sophomore RB Orel Gray who has 1,120 yards rushing on 151 carries in all 12 games played this season. Gray has scored 15 rushing touchdowns and has six receptions for 123 yards receiving. … Do expect University Christian to throw the ball some with sophomore QB Desirrio Riles under center. He comes into the state championship game with a stat line of 60-of-114 passing for 1,041 yards with 13 touchdowns going against five interceptions. … When the Fighting Christians do pass it, expect junior WR Ja’won Grey to be the target as he leads the team with 30 catches for 471 yards receiving and seven touchdowns. … University Christian has several leading tacklers including senior LB Joe Carter who leads the team with 68 tackles, 12 tackles for loss, and two sacks, while junior DL Jerome Manning has racked up 65 tackles, 15 tackles for loss and is tied as the team’s sack leader with six sacks. Sophomore DE Kaydrick Robinson who has collected 56 tackles and 15.5 tackles for loss also has six sacks for the Fighting Christians. … University Christian has dedicated their season to Jeremy Thomas, the twin brother of assistant coach Matt Thomas. Jeremy, who lost his battle with cancer earlier this year was a former football state champion for the Fighting Christians. The team has been wearing No. 86 on their helmets this season in his honor. … Head Coach David Penland III’s father David Penland Jr. is the defensive coordinator for University Christian.

No. 17 Northwestern beats No. 21 Miami Central Top 100 opener for both South Florida teams