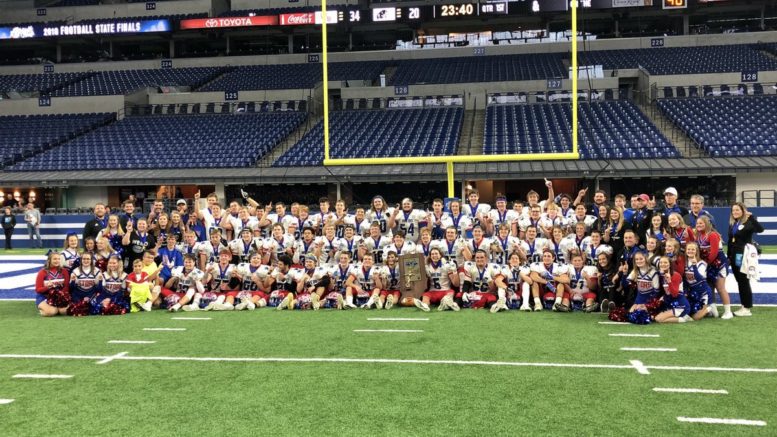 Spencer Wright connected for the second of four touchdown passes to Logan Benson on the first offensive play of the second half to spur Western Boone to a 34-20 victory over Eastbrook in the Class 2A title game.

The Stars thus completed a 15-0 season with the victory, its first undefeated season in school history, and claimed the second state title for the school — the first since 1988.

Western Boone trailed, 14-10, at halftime, then recovered an onside kick attempt by the Panthers (13-2) to open the second half. On the first play, Wright found Benson for a 56-yard score and a 17-14 lead. That duo connected on a 9-yard pass for WeBo’s first score in the second quarter.

On the next possession, Wright and Benson hooked up again, this time on a 25-yard score for a two touchdown lead.

The Stars, coached by Justin Pelley, put the game away in the final quarter on Elliott Young’s second field goal (a 26-yarder after booting a 25-yarder late in the first half) and the final hook-up between Wright and Benson – this one a 24-yarder with 3:04 left.

All told, Wright completed 24-of-34 passes for 317 yards, while Benson had nine catches for 159 yards. His four TD receptions is a state finals record for all classes. Wright also rushed for a game-high 82 yards.

Eastbrook quarterback Dylan Bragg ran for his team’s three touchdowns and completed 6-of-7 passes for 105 yards.

The Panthers fell for the third time in the state title game, each appearance under coach Jeff Adamson.

Most Field Goals
(Tie) 2 by Western Boone vs. Eastbrook

Most Passing Touchdowns
(Tie) 4 by Western Boone vs. Eastbrook

Most First Downs
30 by Western Boone vs. Eastbrook

Most Punts
(Tie) 7 by Eastbrook vs. Western Boone

Most Touchdowns
(Tie) 4 by Logan Benson, Western Boone vs. Eastbrook

Most Receiving Touchdowns
4 by Logan Benson, Western Boone vs. Eastbrook

Most Punts
(Tie) 7 by Zane Shilts, Eastbrook vs. Western Boone

Peyton is the ultimate utility man for the Western Boone Stars, playing snaps at wide receiver, defensive back, kicker, punter, and kick returner. He leads the team with 5 INTs on the season and has scored 4 TDs on kick returns this season. Peyton is a team captain for the Stars’ football, baseball, and boys’ basketball teams and has been named All-Sagamore Conference in all three sports. Off the field, Peyton is involved in the WeBo Student Council, Athletic Ambassadors, Kiwanis Leadership, Pep Club, and Family, Career and Community Leaders of America (FCCLA). Peyton also spends time volunteering in his community, most notably with the Thorntown Fish Fry each year.

Peyton is the son of Jeremy and Angie Young of Thorntown, IN. He will be attending the University of Southern Indiana on a baseball scholarship.

Each year the IHSAA Executive Committee selects a senior player who was nominated by his principal and coach and was determined to have best demonstrated mental attitude, scholarship, leadership, and athletic ability. The Indianapolis Colts presented a $1,000 scholarship to Western Boone Jr-Sr High School in the name of Peyton Young. The Colts have been the presenting sponsor of the entire football state tournament since 2009, including the mental attitude awards.

Beginning in 2015, the Class A, 2A and 3A awards were re-named in honor of Ress, the IHSAA’s seventh commissioner who led the organization from 2000 to 2011.