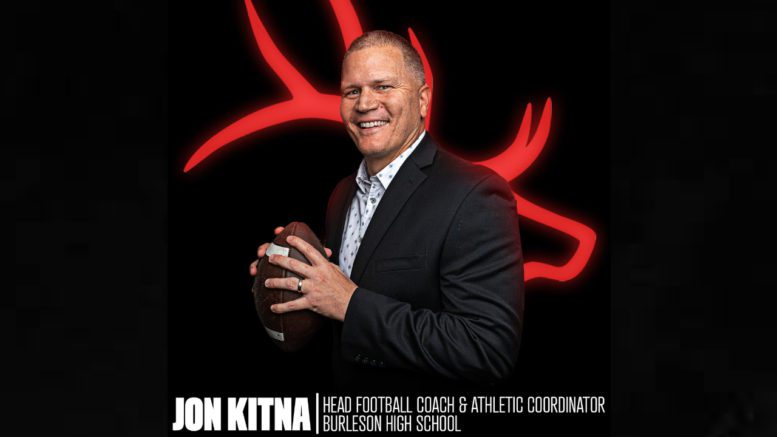 “Burleson High School was looking for a head coach and athletic coordinator to build not only a strong program, but also strong relationships among students and the community,” said Burleson Independent School District (BISD) Superintendent Dr. Bret Jimerson. “I believe the committee got it right in selecting Coach Kitna to lead the program.”

BISD Athletic Director Kevin Ozee said, “Coach Kitna brings a wealth of successful experience at multiple levels of football, and his grasp of coaching and leadership is exceptional. The most important quality of Coach Kitna’s program is coaching the total student in all aspects of life. He has a unique way of modeling and teaching his players, and I believe this hire will take the BHS community to a whole new level.”

“Football taught me lessons about character, integrity, and grit. My goal is to develop athletes and set them on a path to success at the next level, whatever that may be,” said Kitna. “My wife Jennifer and sons Jalen and Jamison, and I are excited to become part of the Burleson community, and I look forward to establishing a leadership factory through the avenue of a top-flight football program.”

Since retiring from the NFL, Kitna has had a mix of high school and professional coaching experiences. His first head coaching job was at his alma mater, Lincoln High School in Washington. During his three years at Lincoln, Kitna led the school to a 24-8 mark with a perfect regular season in 2014.

After his hiring at Lincoln, I interviewed Kitna on the High School Football America Radio Show that you can listen to below:

Kitna left Lincoln to become the head coach at Waxahachie High School in Texas in 2015. During his three seasons with the Indians, Kitna was 20-13 with one playoff appearance.

After a one year stop at Brophy Prep in Arizona, Kitna returned the pro ranks as the quarterbacks coach for the Dallas Cowboys. He was not retained by new Cowboys’ head coach Mike McCarthy.