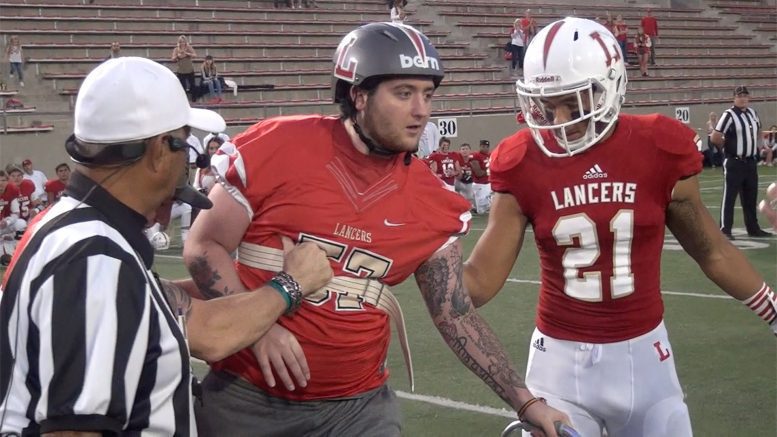 Motivation can come in many forms in sports.  Several weeks ago, the Orange Lutheran (Orange, California) football program got motivation from a former player, who showed the team’s current players that they can accomplish anything, if they set their mind to it.

Before OLu’s September 23rd game against Mullen High School (Denver, Colorado), Christian Licciardi, a former offensive lineman who graduated in 2011, was brought into the Lancers’ locker room in a wheelchair for Orange Lutheran head coach Chuck Petersen’s pre-game speech to his players. Licciardi will spend the rest of his life in a wheelchair, because last Thanksgiving he began to get excruciating headaches, which eventually led to him being diagnosed with bacterial meningitis, which was not determined until he had major surgery to relieve swelling and pressure in his brain. Originally, Licciardi was diagnosed with viral meningitis.

Doctors weren’t sure if Christian, who played college football at Division II Adams State in 2014, would survive his original surgery, which led to almost half of his skull being removed on his left side. He did survive, but nine days after the intense brain surgery, doctors told his family that infectious abscesses were growing in the right side of his brain and another surgery was needed. Once again, Christian survived, but suffered four strokes due to the pressure on his brain.

Christian’s parents were originally told that their son might not live, but after the two surviving the two surgeries, they were told it was likely that he would not be able to every speak again and never feel or move anything on his right side.

Since the first two surgeries, Licciardi has had to face blood clots, brain bleeds, pneumonia three times, another brain surgery and removal of his new prosthetic skull. In addition, he’s endured induced comas and paralysis and his entire body being induced in a 72-hour semi-frozen state. The list of Christian’s medical battles goes on-and-on.

However, on September 23rd, Christian threw-out his medical charts to achieve a goal, which was to walk-out onto the field with this year’s Orange Lutheran team captains for the coin toss. The team had given Christian the goal over the summer, and with help from his father, Christian was able to get out of his wheelchair and walk to the center of the field.

Below is video of Christian’s incredible journey at Santa Ana Stadium that was done with a big smile on his face.

It should be noted, that since Christian graced the team’s locker room and the field with his presence, Orange Lutheran has won two straight heading into Friday night’s showdown with Mater Dei, which is the top team in the High School Football America California and Southern California Top 25’s and #3 in the country in our latest national rankings.

If you’d like to help Christian, you can donate on his GoFundMe page.