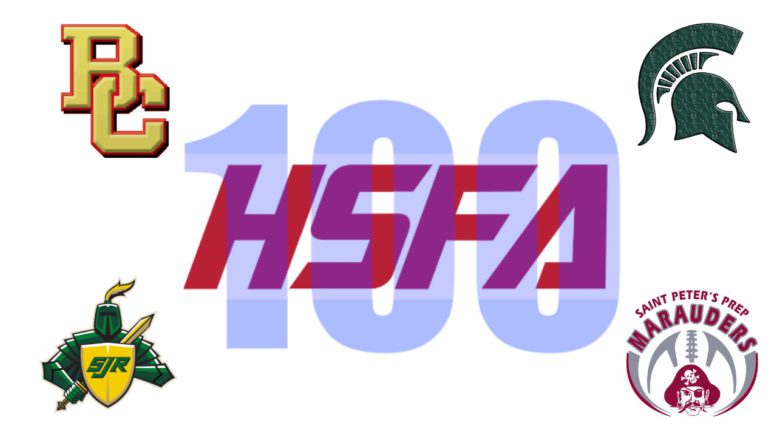 Bergen Catholic leads the charge of four New Jersey teams ranked in the High School Football America Preseason 100 that is created with our proprietary algorithm. The Crusaders are ranked No. 8 to start the season.

BC, which finished No. 12 in our national rankings last year after winning the Non-Public Group 4 championship, opens the season against Grayson (Georgia), ranked No. 3 in the Preseason 100, on August 31. The Crusaders will then play three New Jersey Super Football Conference United Red Division foes that are nationally-ranked.

On September 14, Bergen Catholic will play No. 72 St. Peter’s Prep, followed by No. 18 St. Joseph Regional (Montvale) on October 6 and No. 13 DePaul Catholic in the regular season finale on October 27. The Grayson, SJR and DePaul games will be road contests for the Crusaders.

St. Joseph has the toughest schedule in the United Red Division. The Green Knights have Bergen Catholic and DePaul, plus two non-league games against nationally-ranked out of state teams.

SJR opens against defending Florida 5A state champ American Heritage (Plantation, FL) in the Freedom Bowl in Georgia on September 1. The following week, the Green Knights return home to face No. 48 Imhotep Charter from Pennsylvania.  After those two games, St. Joe’s takes on DePaul, which means the Green Knights open with three straight nationally-ranked squads.

St. Peter’s also has an out of state nationally-ranked team. SPP played No. 12 St. Joseph’s Prep from Pennsylvania on September 8.

Making our honorable mention list, which is for teams ranked above No. 125, you find Don Bosco Prep, Phillipsburg and Pope John XXIII.