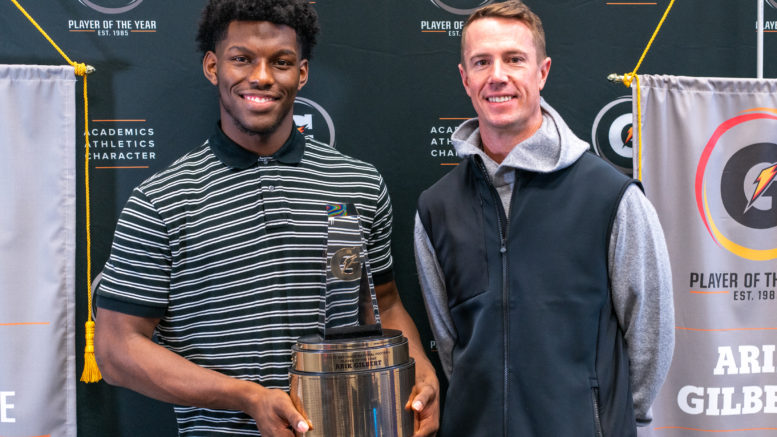 It’s been an exciting few days for Arik Gilbert, who on Saturday captured a Georgia 7A state championship with his Marietta High School teammates and Tuesday was named Gatorade’s National Football Player of the Year.

Atlanta Falcons quarterback Matt Ryan surprised Gilbert with the award in front of family, friends, teammates and coaches at his school. You can watch the presentation below.

Gilbert, who is the nation’s No. 1 tight end college football prospect, caught 102 passes for 1,735 yards and 14 touchdowns this past season. He’s a two-time All-State honoree. Last year, he was named Region 3 Offensive Player of the Year. In a couple of week’s, the future LSU Tiger will play in the 2020 All-American Bowl.

Gilbert is the founder of a campus-wide initiative called “Whisper,” which urges students to have device-free conversations and supports diversity and inclusion efforts, Gilbert has also volunteered on behalf of the East Atlanta Kids Club, Habitat for Humanity and March of Dimes. He’s also donated more than 50 hours to Marietta elementary schools and the Marietta Youth Football program.

In the classroom, Gilbert maintains a 3.14 grade point average.

The award recognizes not only outstanding athletic excellence, but also high standards of academic achievement and exemplary character demonstrated on and off the field, distinguishes Gilbert as the nation’s best high school football player. A national advisory panel comprised of sport-specific experts and sports journalists helped select Gilbert from more than a million high school football players nationwide.

This is the 35th year that Gatorade has award the National Football Player of the Year Award. Past winners have combined for six NFL MVP awards, 30 Pro Bowl appearances and six have been NFL first round draft picks.

Through Gatorade’s cause marketing platform “Play it Forward,” Gilbert has the opportunity to award a $1,000 grant to a local or national youth sports organization of his choosing. He is also eligible to submit an essay to win one of twelve $10,000 spotlight grants for the organization of choice, which will be announced throughout the year.

Gilbert is now a finalist for the most prestigious award in high school sports, the Gatorade Male High School Athlete of the Year award, which is announced at a special ceremony prior to The ESPY Awards in July.