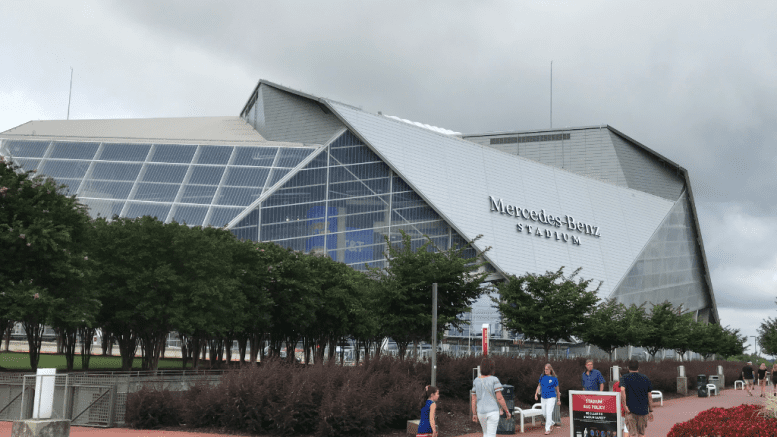 You know that the 2021 high school football season is just around the corner when the Corky Kell Classic announces its great lineup of Georgia high school football games. This year’s season-opening kickoff classic will feature 11-games over four days and culminate with five games at Mercedes-Benz Stadium, home of the National Football League’s Atlanta Falcons.

Hoover was scheduled to play in the Corky Kell Classic last year against South Georgia’s Lowndes High School, but the game was cancelled due to a change in schedules due to the coronavirus pandemic. If the Bucs get to play in Atlanta this year, it will mark the first time in the 30 year history of the event that a team outside of Georgia has played in the kickoff classic.

“I don’t think there is an event in high schools in the entire country like the Corky Kell,” said Score Atlanta President and Corky Kell executive I.J. Rosenberg. “The fact that we were able to make it through last season, doing the event at nine different locations, makes this year even sweeter.”

Due to the pandemic, none of last year’s games were played at the home of the Falcons.

Another big matchup this year will take place on Friday night, August 20 at Dacula High School when 2020 Georgia 6A champ Buford will take-on North Cobb. Last year, North Cobb surprised many with a 28-14 win over the Wolves, who finished the season ranked No. 65 in our Top 100. North Cobb finished last season ranked No. 102 in the nation.

Two other nationally-ranked teams will be in action at Mercedes-Benz on August 21.

No. 47 Lowndes, which advanced to the 7A state semifinals last season, will face Walton at 2:45 p.m. in the dome. The team that beat Lowndes in the state semis, Collins Hill, which finished No. 105 in our national rankings, will play Brookwood in the Saturday nightcap at the dome at 8:45 p.m.

Lowndes and Collins Hill feature two of the top quarterbacks in the state and nation. Sam Horn, who led Collins Hill to a 7A runner-up finish, is currently ranked No. 9 in the 247Sports.com composite rankings for Class of 2022 quarterbacks. Lowndes’ Jacurri Brown is ranked No. 11. Neither quarterback has made a decision on where they’ll play in college.

Overall, 21 of the 22 teams in this year’s event made the postseason in 2020. Ten of the teams finished last season ranked in the High School Football America Georgia Top 25.

Below is the entire schedule:

Thompson hangs on to No. 1 in Alabama Top 10 despite loss