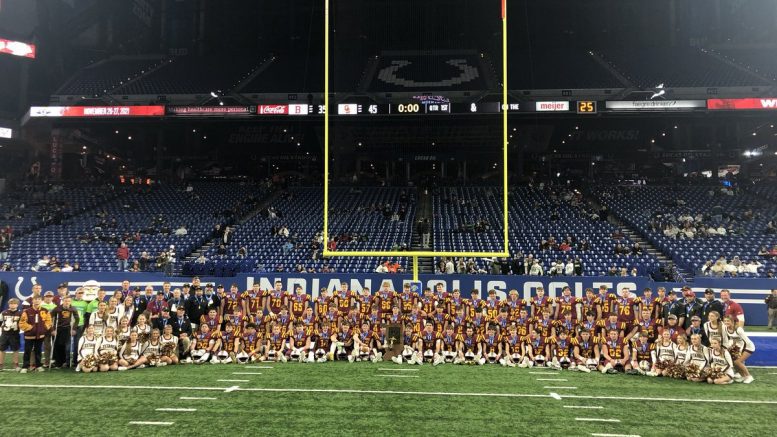 Behind record-setting performances by Gibson Southern quarterback Brady Allen and receiver Rory Heltsley, the Titans beat Brefeuf Jesuit 45-35 for the Class 3A championship at Lucas Oil Stadium, home of the Indianapolis Colts, who sponsor the state championship games. The Titans had to overcome a 19-point deficit to capture the title.

Gibson Southern's Nick Hart on his team erasing a 19-point deficit to win the 3A state title: "Our heart and how much this group is together helps us prevail in tough situations and they stayed together and kept playing and kept fighting."@IHSAA1 | @GSTitans1 pic.twitter.com/8frbtJovPP

Allen, a Purdue recruit, set a Class 3A game record by completing 28 passes with a record 13 going to Heltsley, who turned those catches into a record 218 yards and a record-tying three touchdowns.

Brebeuf started fast and moved out to a 26-7 lead with 9:13 left in the first half behind three touchdown receptions (matching the 3A record) by Max Walters.

Gibson Southern (14-1) began its comeback with a 3-yard TD run by Adrean Lukeman and a pair of TD receptions by Heltsley to pull within 29-28 at halftime. The Titans then took the second-half kickoff and drove 80 yards in 12 plays, culminating in an 11-yard scoring pass to Kaden Hurless and GS never trailed again.

Fourth and goal on the 21-yard line and Brady Allen comes through in the clutch!

The @GSTitans1 take the lead on Kaden Hurless' touchdown reception.

Allen finished 28-of-50 passing for 398 yards with five touchdowns and three interceptions.

For the Braves of coach Matt Geske, Walters matched Heltsley with 13 receptions, good for 210 yards and the three scores.

Brebeuf, which was seeking its first state title in its third appearance, finished 12-3.

Ryan maintains a 3.78 GPA with a vigorous workload. He is a leader in the school as evident by his involvement in Beta Club, Theatre, Fifth Quarter (teen outreach program) and Fellowship of Christian Athletes, where is the president.

Earlier this fall, Holzmeyer met with school administrators about hosting “Veterans Night” prior to one of their home football games. He contacted the local VFW and organized the entire event on his own resulting in over 30 military veterans in attendance.

He is the son of Jason and Lee Ann Holzmeyer of Fort Branch, IN. He intends to attend Marian University and major in Catholic Studies.

The Indianapolis Colts, a corporate partner of the IHSAA, presented a $1,000 scholarship to Gibson Southern’s general scholarship fund in the name of Ryan Holzmeyer.

Playing in the NFL will not not stop Josh McCown from coaching No. 77 Myers Park (North Carolina)