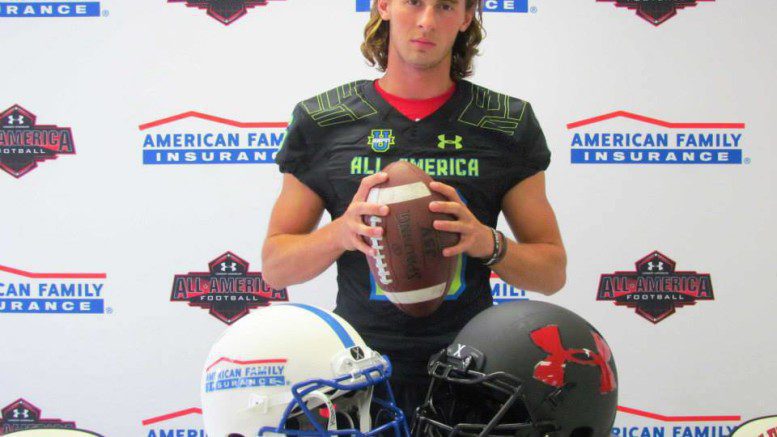 Glendora High‘s Matt Fink’s path to the Under Armour All-America game is unique from many other players selected for the annual showcase.

He did not play 7-on-7. He attended only a few camps and clinics. He let his performance at one key event speak for itself.

Fink, a USC quarterback commit from Glendora, Calif., went from relative unknown to the “hot” QB in recruiting circles in a few months last spring. And Thursday, he received his Under Armour All-America jersey as the Selection Tour presented by American Family Insurance stopped at his school.

“I’m excited to go out there and compete,” he said. “The top prospects in the nation are going to be there. It’s a chance to from other good athletes and turn into a learning experience and use what I learn to college and beyond.”

Fink said he didn’t like the setting at 7-on-7 events because he didn’t see how the format “would make me better in any way, shape or form.” He opted to work with private coaches and then attended the Blue/Grey All-America Combine in Ventura, Calif.

His performance there sparked interest from USC and Notre Dame among others. He chose the Trojans in May. The USC campus is about 90 minutes from his home and will allow his family and four siblings to see him play regularly.

“I’m locked in for sure (with USC),” he said. “I’m going to take my official visit in December and go to all sorts of games. I’m not planning to go anywhere else or visit anywhere else.”

Before that, he is hoping to get Glendora back in position for a league title. The team reached the Palomares League title game last year but Fink injured his ankle in the game and Glendora lost to South Hills 14-13.

“Last year ended pretty badly,” he said. “I’m not saying the reason we Iost was because I was injured, but it hurt our team in the offensive aspect. … We’re coming in hot for those guys and want to go after the league title.”

Blind Long Snapper gets a shot at the next level