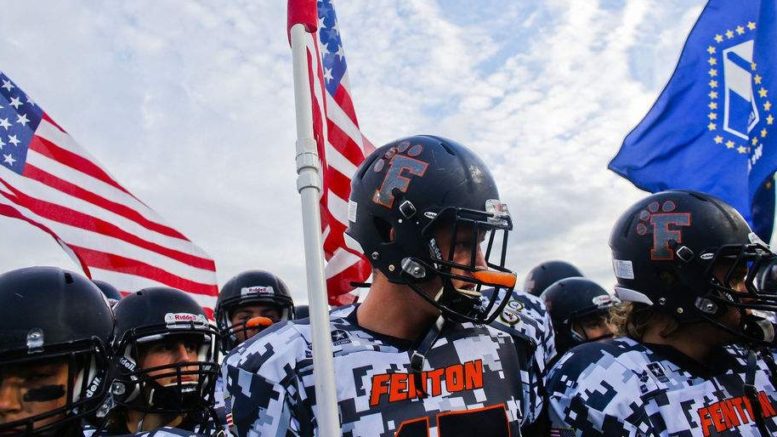 There’s a great online competition going on between high school football teams that are looking to help others. It’s called the Great American Giveback that was created by Addix of Lowell, Michigan. Addix, one of the leading providers of custom sports apparel with 100 percent of its products manufactured in the United States, is giving away $20,000 in “cause game” team gear via a social media contest that began on Monday.

In the middle of it all is Noel Dean, the recently retired Michigan High School Hall of Fame head coach at Lowell High School, who ten years ago envisioned and created the Pink Arrow Pride game that raised $2.2 million for people in his community who are battling cancer. One of the reasons Dean retired was to spend more time with Addix where he is a Vice-President.

Dean says that the idea behind the Pink Arrow Pride game can spread good beyond Lowell, which is a small community southeast of Grand Rapids. To that end, Dean and his Addix team created the Great American Giveback that is giving away 50 American-made “cause game” team gear garments to the five schools that win in its five categories — Open Division, Gilda’s Club Grand Rapids, Michael Sadler Foundation Cancer Awareness and Military/First Responder Appreciation. The winners are decided by online voting through Facebook, Instagram and Twitter. Voting began on Monday with the semifinals beginning on today.

The giveback contest is open to all sports, but there are a large number of high school football teams from around the nation that are competing.

In the Open Division, which allows the winner to create its own fundraising cause, the high school football teams that made it to the semifinals are: Trinity (North Carolina) and Michigan schools Battle Creek Central, Livonia Clarenceville, Maple Valley and Sparta.

The other high school football teams advancing to the divisional semifinals by state are:

To vote, go to the following Addix social media links:

– twitter.com/addixgear
– facebook.com/addixgearusa
– instagram.com/addixgear
Or visit addixgear.com/giveback to find the social media links for each school.
The semifinal voting begins tonight at 7 P.M. Eastern and ends Thursday at 2 A.M. Eastern.