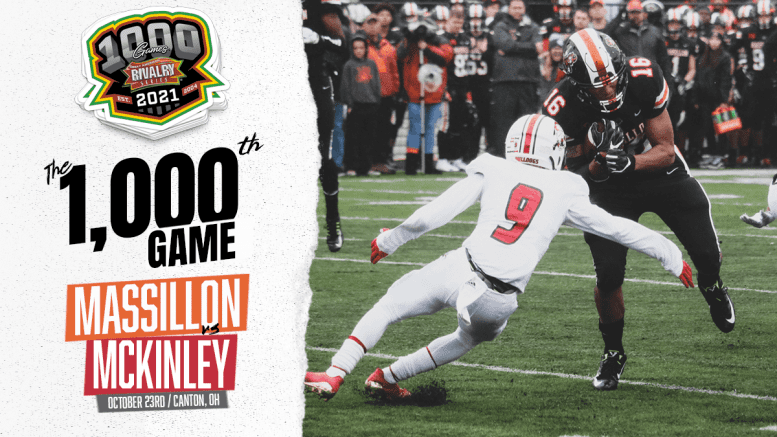 Our friends at the Great American Rivalry Series will be celebrating their 1,000th game this year and it’s a doozy!!

The GARS crew will be in Ohio on October 23 for the renewal of the War of 1894 rivalry between Massillon Washington and Canton McKinley. It will be the 132nd game between the two schools.

Massillon Washington enters 2021 ranked No. 87 in the Preseason High School Football America 100 is powered by NFL Play Football, the NFL’s initiative to provide fun and engaging experience for players of all ages and skill levels.

Massillon Washington has won the last five in the series and nine of the last ten between the two. The Tigers lead the all-time series 73-53-5.

Below is a news release from GARS:

The Great American Rivalry Series® (GARS) reveals its 1000th rivalry game matchup will take place on Saturday, October 23rd, 2021, in Tom Benson Hall of Fame Stadium at the Pro Football Hall of Fame in Canton, OH. The game will feature one of the largest and longest running rivalries in the country between the Massillon Tigers and the McKinley Bulldogs which began in 1894.

Festivities surrounding the 1000th game will include a media day press conference at the Pro Football Hall of Fame, VIP guest appearances from rivalry games past, promotional giveaways, and more. The game is scheduled for 2:00 pm ET, and will be broadcast live on Facebook @RivalrySeriesLive, YouTube, and the GARS website.

Leading up to its 1000th game, The Great American Rivalry Series® has been celebrating its 18-year legacy with a 100-day pre-season GARS Virtual Road Tour promoting the hashtag #GARS1000 on social media. The Tour has featured special content from notable rivalries throughout the years with highlights of legendary athletes, exclusive interviews, and a national fan contest.

The United States Marine Corps, a long-standing partner of the Great American Rivalry Series® and BODYARMOR® will be present at the 1000th game.

“The Great American Rivalry Series has celebrated these classic rivalries for 18 years,” stated founder Rick Ford. “From the Male vs. Manual classic begun in 1893 to one of the best-in-the-country battles between Massillon & McKinley, this is a fitting celebration for our Rivalry Series’ 1000th game.”