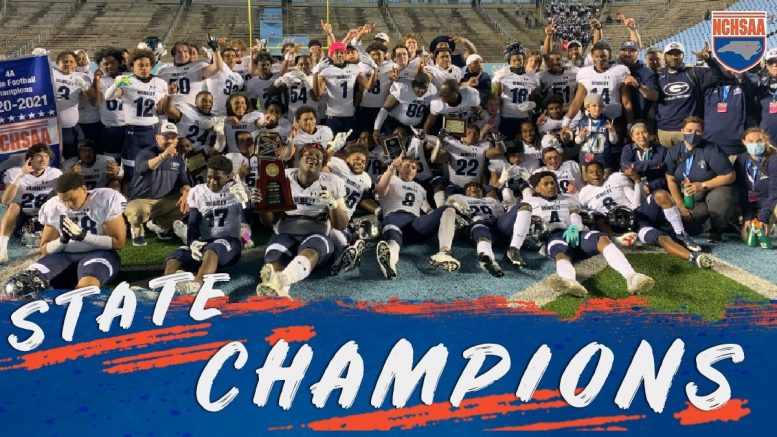 The following story is from NCHSAA

CHAPEL HILL, NC – The Grimsley Whirlies defense came to play, forcing four turnovers and limiting Cardinal Gibbons to 250 yards of total offense on their way to a 28-8 victory in the 4A State Championship Game. The Whirlies collected the program’s first State Championship since the name of the school changed from Greensboro High to Grimsley in 1962.

In what appeared to settle into a defensive struggle in the early going, the game’s Most Valuable Player, as selected by the media, was Grimsley QB Alonza Barnett who opened the scoring on a five-yard touchdown run with 1:27 to go in the opening quarter. Barnett’s run helped the Whirlies capitalize on the first of the Crusaders’ turnovers, plunging into the endzone to cap a four-play, 26-yard drive.

Gibbons was able to win the field position battle with an outstanding punt by Carter Gray that pinned the Whirlies down inside their own one-yard line to start the second quarter. The Crusader defense managed to put some pressure on Barnett who was called for intentional grounding on a throw from the endzone, forcing a safety and putting the Crusaders on the board in the early minutes of the second quarter.

After the safety, the two teams traded possessions until Connor Clark was intercepted by Nate Crawford with less than a minute to play in the half. Crawford returned the pick all the way to the Gibbons 24. On the second play of the late first-half drive, Barnett found Lawson Albright in the back of the endzone for an 11-yard touchdown to stretch Grimsley’s lead to 14-2. 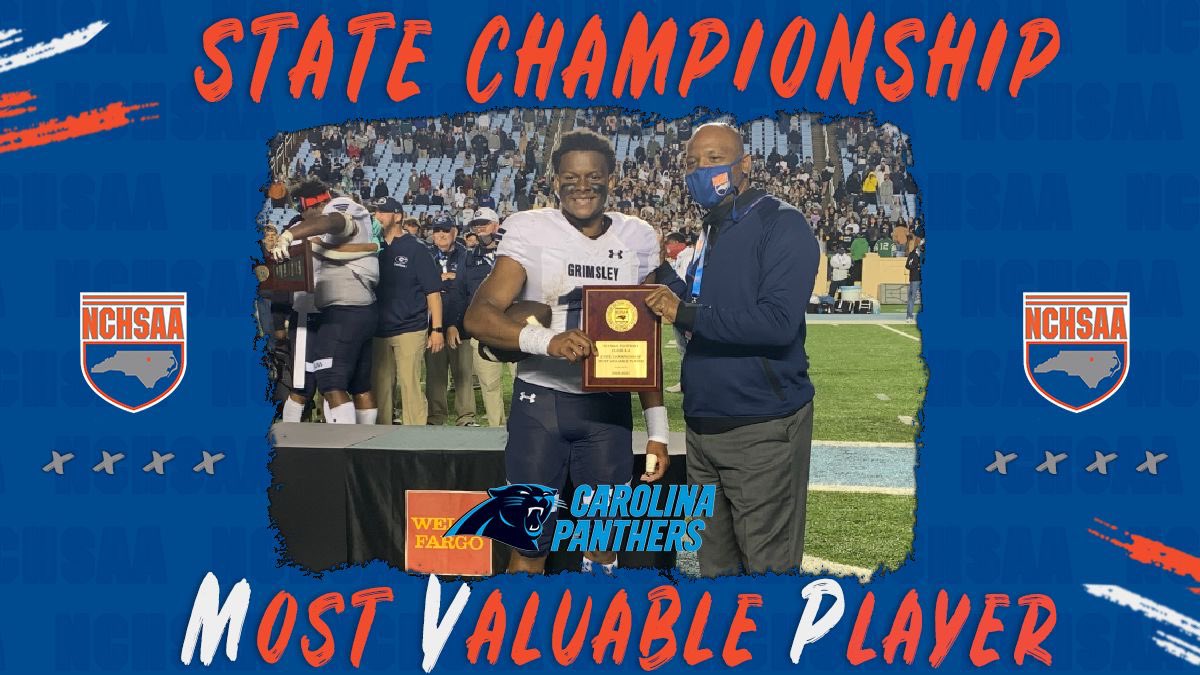 Barnett finished the game with 87 yards through the air and one touchdown pass, netting 30 yards on the ground to go with his ice-breaking touchdown run. He took great care of the football, not throwing an interception on his 17 pass attempts.

Jeiel Melton powered the Grimsley ground game, racking up 116 yards and a touchdown in the game on his way to being named the Most Outstanding Offensive Player for the Whirlies.   Tamoryer Thompson led the way for the Whirlies defense, picking up 3.5 tackles in the game including a pair of sacks and recording two additional quarterback pressures. Thompson was selected as the Most Outstanding Defensive Player for Grimsley.

Donovan Shepard was the bell cow for the Crusader offense, named the Most Outstanding Offensive Player for Gibbons as he led the team with 124 rushing yards and added a 15-yard reception out of the backfield. Shepard did not find the endzone but made several key runs to keep Crusader drives alive and help move the offense forward against a stingy Grimsley front. Jake Ladd was selected as the Crusaders’ Most Outstanding Defensive Player, tallying three tackles and two fumble recoveries in the game.

Cardinal Gibbons wrapped up the season 9-1. The Crusaders were 6-0 in CAP-7 4A play. Gibbons secured the program’s second straight Regional Title.

Grimsley finished the season 10-0. The Whirlies were 4-0 in Metro 4A play. They won the program’s second regional title and appeared in the State Championship Game for the first time since 2005. Grimsley won the school’s first State Football Championships since winning the 4A Championship in 1960 when the school was then named Greensboro High.

High School Football’s No. 1 All-Purpose back — Will Shipley — gives verbal to Clemson