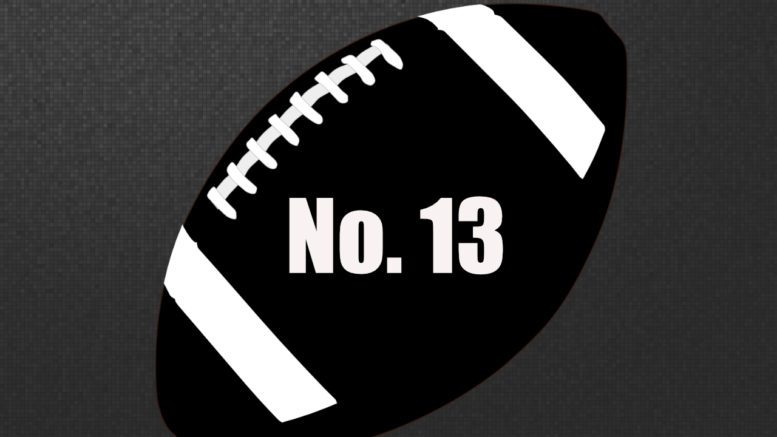 The measuring stick I’m using today is the Pro Football Hall of Fame in Canton. Meaning, how many Hall of Fame players wore the number that’s considered unlucky.

And, out of the seven that wore 1-3, only three are from the modern era — Dan Marino, Don Maynard and Kurt Warner. The others are: Guy Chamberlin, Pete Henry, Joe Stydahar and George Trafton.

Of course, Marino and Warner are both quarterbacks, but both had very different high school careers. Marino played in the land of big name quarterbacks in western Pennsylvania, while Warner played in a small community in southeast Iowa.

Marino played at Pittsburgh Central Catholic, but the Vikings didn’t throw the ball a lot. Media reports indicate that in his season season in 1978 he averaged about 15 passes a game, throwing for 1,596 yards. He completed 60 of 173 passes with sixteen of them going for touchdowns.

At the end of his senior year, he was named a Parade All-American after leading Central Catholic to its first-ever Western Pennsylvania Interscholastic Athletic League playoff appearance. Marino and the Vikings lost in the first round, finishing 9-2.

Marino was also a very good baseball player. Good enough to be drafted in the Major League Baseball Amateur Draft by the Kansas City Royals.

Unlike Marino, who wore No. 13 in high school, Warner wore No. 12 while playing at Regis High School in Cedar Rapids. Warner was a multi-sport athlete, who in four seasons of varsity football, broke every school passing record.  As a senior, he was named All-State and played in the North-South Shrine Bowl.

Chamberlin, who was a halfback and end, played in the 20’s. He is one of only three Hall of Famers from Nebraska. Chamberlin played a Blue Springs High School.

Like Chamberlin, Trafton played in the NFL in the 20’s. He played at Oak Park High School outside of Chicago from 1913 through 1915.

Henry was an Ohio native that played at Mansfield High School, where according to his Wikipedia page he played fullback and was also a lineman from 1911 to 1914.

Stydahar was considered one of the greatest football and basketball players ever in West Virginia when he attended Shinniston High School.