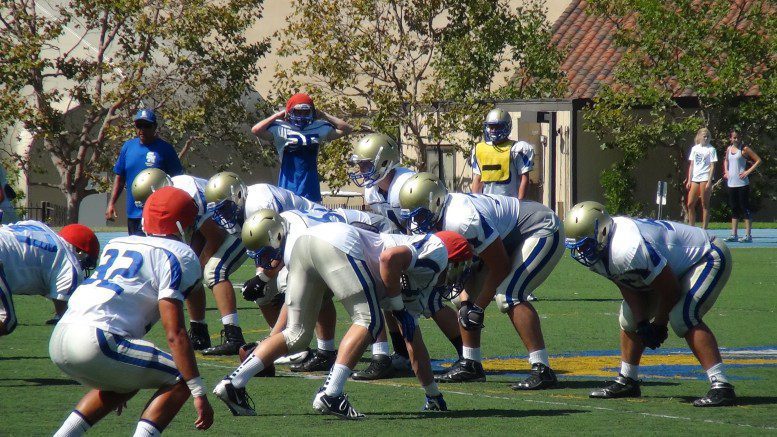 Earlier this week, the Ivy League, known more for education than football, made national headlines when its eight head coaches voted unanimously to eliminate full-contact hitting from practices during its regular season.  The new rule will take effect for the 2016 season once the league’s athletic directors, school presidents and policy committee vote on the plan.

The inspiration for the new rule began at Dartmouth, which last year shared the Ivy League championship with Harvard and Penn.

In 2010, head coach Buddy Teevens eliminated full-contact during the Big Green’s football practices.  According to many media interviews that Teevens has done since then, after the tackling was taken-out of the team’s practices, injury and concussion rates dropped and his players were fresher and healthier.

Once Teevens and Dartmouth eliminated tackling, the college’s Thayer School of Engineering went to work on developing something that can only be described as Tackling 2.0.  Now during practices, the Big Green chase and tackle a 5-foot-10, 150-pound robotic dummy that I got a look at in action during January’s American Football Coaches Association annual convention in San Antonio, Texas.  It’s called a Mobile Virtual Player or MVP for short.

Check this! Technology at #AFCA2016 pic.twitter.com/u1p0tUKNh9

So how will the Ivy League’s decision influence other levels of the game, including high school football?

“The obvious benefit is less cumulative head impacts for a larger number of players than at the college level,” said Dr. Chris Koutures, team doctor at Orange Lutheran in Orange, California.  “But, you have to balance this with concern/risk of high school players not being as experienced with tackling and may actually increase injury risk during in-game play.”

Koutures added, “We don’t have data about the what the elimination of practice tackling in-season at high school level would do, but a study from the University of Wisconsin-Madison showed that decreased hours of full contact practice led to less concussion risk in practice and no higher risk in games for all levels — freshman to varsity.  Its possible that no tackling would create similar or even more convincing results.”

As far as the coaches we talked with, a majority felt that the “Ivy League Way” wouldn’t work at the high school level.

“I would be reluctant to support such a move (at the high school level), because it would eliminate the needed progression toward preparing players for the real game,” said John Hebert, head coach at Carmel High School (Carmel, IN).  “Players need some work on live tackling prior to the first contest.  How much work they need is a matter of preference for the coach.  What we all have in common is a desire to be prepared, but also to be healthy and safe.  We can’t be successful otherwise.”

Hebert added, “If all eight Ivy League coaches are going to meet to have input on gradually implementing live tackling prior to contests then it is probably a positive step for them.  If they are actually banning ALL live tackling in practice, it would offer a greater payoff to the political and campus concerns than actually making the game itself safer for their players, in my opinion.”

“I don’t believe that stopping full contact hitting would be beneficial to my players,” said Augie Hoffmann, head coach at St. Joseph Regional (Montvale, NJ).  “It’s my responsibility to get them in shape and ready for the season and hitting is a part of that.  What I do think is most important is being able to monitor every drill and have the pulse of your team at the forefront. We as coaches need to know when to push and more importantly, we need to know when to scale back.”

“Personally I think the rules that have been adopted by the Ivy League which bans full contact tackling from all in-season practices are not completely necessary for the high school level,” said Jason Negro, head coach at St. John Bosco (Bellflower, CA).  “As a high school football coach, my main objective is to teach proper fundamentals of tackling to student athletes of all skill levels in the safest manner possible.  I firmly believe these tackling sessions must continue to be taught throughout the season to ensure the safety of our athletes during all games regardless of level.  For those states that do not allow schools to have padded spring or summer practices, such as the case in California where I coach, it would be difficult to properly teach the art of safe tackling with no exposure to full contact tackling during the season.”

“Dartmouth has taken a unique approach to handling the concussion epidemic by eliminating full contact in practices,” said Jason Strunk, head coach at Lubbock High School in west Texas.  “While this step is a way of forward thinking, I do not see this catching on across the country. I think it would take a program like Alabama or Florida to adapt the Dartmouth Way in order for more coaches to follow through on this.  This step is something I would not ever consider, unless I was told to do so”.

“Not having the luxury of a large roster in the past, we very rarely went live or in full pads,” said Phil Stambaugh, head coach at Notre Dame-Green Pond (Bethlehem, PA).  “We put the emphasis on form tackling and drills vs. taking anyone to ground.  We can’t afford to lose anyone, but still needed to teach our kids how to practice full speed and how to use proper techniques to tackle to avoid injury.”

Stambaugh added, “It’s a double-edged sword to take out the live tackling practice, but we always lean towards caution with a quick whistle and use a controlled tempo if we do a live drill.”

Moschetti added, “What we do, is called full Thud. What Thud is, is full go contact — we just don’t take the player to the ground.  The rest of the year, after the first week, from August through December is full thud practice.  We have done this for eight years at La Mirada.  It’s what we did when I played in college at the University of Colorado and what the NFL has also been doing for years.”

“For the last 4-5 years I have eliminated full-contact tackling from our in-season practices,” said IMG Academy (Bradenton, FL) head coach Kevin Wright.  “Even in the spring and fall preseason, we seldom take people to the ground.  Our focus has been on practicing smarter and making sure we are as technically sound as possible.”

“We practice at a fast tempo without full contact drills. It actually has helped us increase the number of reps we get in practice and also has shortened our amount of on field practice time.  We video everything, because we have gone away from full-contact drills, it has really forced our staff to put a much higher emphasis on teaching both on the field and in the classroom.  As a result of this approach I think our kids are better prepared both physically and mentally on game nights,” added Wright.

“We rarely tackle live to the ground in practice all season,” said Hebert.  “Perhaps the only time we do, is during a one to two week period prior to our first game in August.  I feel like we can make up so much ground in the area of being reluctant to enter into the pile in that short amount of time.  At most, we will tackle live in three 5-minute periods and an intrasquad scrimmage.”

“I would strongly support limited full contact tackling practices during the season,” said Negro.  “Tackling can continue to be taught throughout the season without it being full contact at all times.  Varying practice speeds or tempos could be used to achieve the same level of teaching proper fundamentals while keeping the student athlete safer.  Tackling bags or dummies can serve just as an important function as a live body.  I think that a combination of full and non-full contact tackling practices would be the most effective format at the high school level therefore reducing the opportunities for student athletes to be injured.”