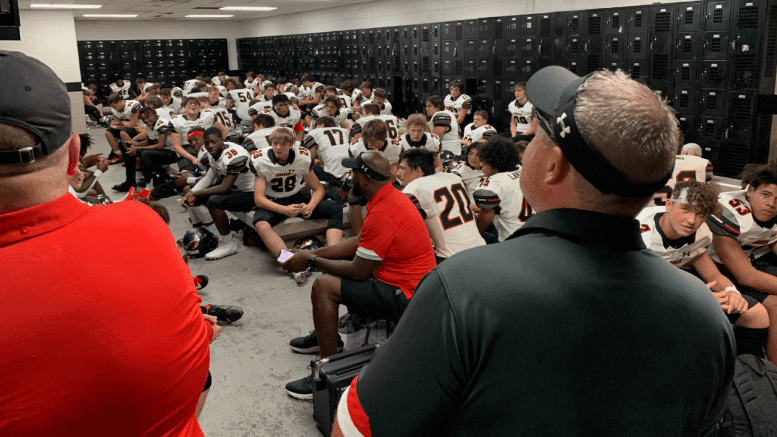 Cherokee head coach Josh Shaw talks with his team before its rivalry game against Sequoyah.

The 26th game in the Cherokee-Sequoyah rivalry will be remembered for a long time. The Warriors stopped Sequoyah’s two-point conversion attempt at the end of the game in a 26-25 victory that gave Cherokee its third straight win in the series that Sequoyah now leads 14-11-1.

It looked like Cherokee (2-0) had the game wrapped-up when it took a 26-13 lead late in the third quarter after the second touchdown pass between AJ Swann and Adarrius Harshaw.

Sequoyah (1-1) battled back to close to within one point with :18 seconds to go in the game. Chiefs’ head coach James Teter decided to go for two and the win.

The Cherokee defense was equal to the task, stopping quarterback Matthew Traynor at the goal line on a keeper.

Harshaw, who had three touchdowns, one rushing and two receiving, and running back Zi Johnson were the Offensive Players of the Week.

Harshaw had 135 yards of total offense on five catches for 111 yards and two runs totaling 24 yards.

Johnson averaged 8.4 yards per carry on 16 carries. He finished the night with 134 yards, including the below run for 44 yards.

Defensively, the Warriors were led by Tyler Goddard’s 17 solo tackles that included a sack. With his five assisted tackles, he finished the night with 23 tackles.

Below are the team’s defensive stats:

Below are the offensive numbers:

You can watch the entire broadcast of the game below.

Hometown Team: Cherokee head coach Josh Shaw looks back at Sequoyah and ahead to Rome