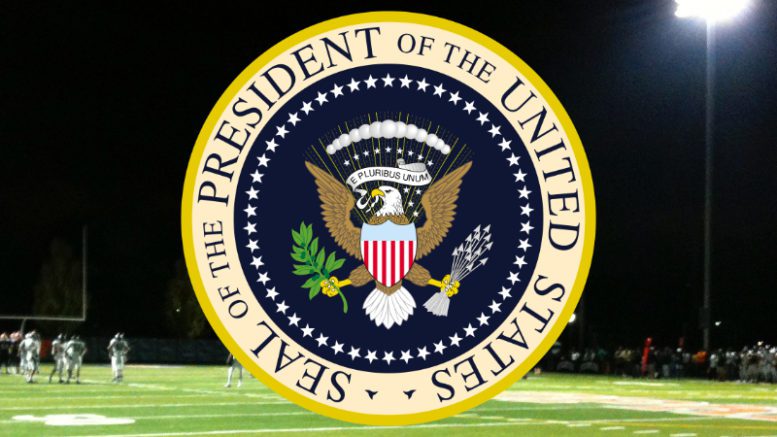 I’ll list them alphabetically so this story doesn’t become political.

Dwight D. Eisenhower – played football at Abilene High School in Abilene, Kansas. Below is a excerpt for President Eisenhower’s website about his time playing football for the Cowboys.

Ike attended integrated schools, but when some of his football teammates refused to line up opposite a visiting African American player, Eisenhower volunteered for the position, and shook the player’s hand after the game. As a boy from the wrong side of Abilene’s class-dividing tracks, Ike knew the minimizing indecencies of prejudice all too well.

Gerald Ford – played at South High in Grand Rapids, Michigan where he was the captain of the team during his senior season. According to his biography, President Ford was All-City and All-State as a center. He received a college scholarship for football, playing at the University of Michigan. President Ford had offers to play football professionally, but chose to go to Yale instead to study law.

John F. Kennedy – attended the Choate School in Wallingford, Connecticut. As a 16-year old President Kennedy played on the junior team as a left end and tackle. However, illnesses prevented the 35th President of the United States from moving up to the varsity squad. He went on to Harvard University where he never made it beyond the JV team because of illness and injury.

Richard Nixon – attended Whittier High School in Whittier, California for his final two years of high school, but the exact nature of his time on the football team is a bit fuzzy.  CalHiSports.com, which does a great job with California high school football history, indicates that President Nixon didn’t play on the team, but instead he was a “sports commissioner” for the school.  Other media reports state that he did play on the high school football team at Fullerton Union High School before transferring to Whittier High. At Whittier College, Nixon was a bench-warmer as a 5-11, 175-pound offensive guard or tackle.

Ronald Reagan – played high school football at Dixon Union High School, a co-op team, in Dixon, Illinois. The 40th President of the U.S. played on the offensive line as a guard and tackle.  He went to Eureka College where he was on the team for three years, but didn’t see much playing time.

And, for those of you wondering, most experts say that President Ford was the best of the lot…on the gridiron! LOL

Scorestream’s Photos of the Week