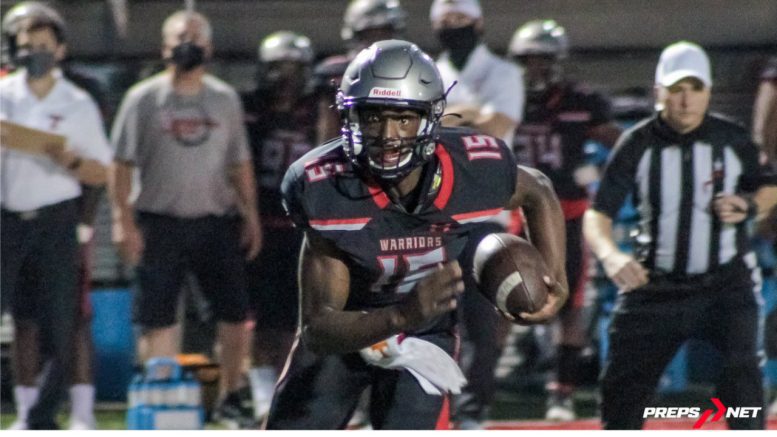 The 2020 Alabama high school football season will be a dandy if Week 1 is any indication. The opening week ended Saturday night with a battle between the defending 7A and 6A state champs.

Thompson, No. 1 in the Preseason High School Football America Alabama Top 10, beat No. 4 Oxford, the defending 6A champs, 56-34. Thompson was led by junior quarterback Connor Harrell, who tossed three touchdown passes and ran for two more. Harrell was 18-of-25 for 269 yards.

Both teams were ranked in our Preseason High School Football America 100 before it was shutdown because of changing schedules due to the coronavirus pandemic. Thompson, which finished No. 14 in the High School Football America 100 in 2019, would have started the season ranked No. 35. Oxford was ranked No. 84 before we decided to wait until October 4 for the release of our first national rankings that are created with our proprietary algorithm. In 2019, Oxford was ranked No. 111.

In the weekend’s other big intra-Top 10 match, No. 2 Hoover topped No. 5 Central of Phenix City 45-35. Hoover, ranked No. 45 in our preseason national rankings, had to overcome a 14-point to beat the 2018 7A champs playing their first game under former Pinson Valley head coach Patrick Nix.

Hoover 45, Central-Phenix City 28 | 2:59 4Q | Dylan Betts-Pauley with a 25-yard touchdown run for the Bucs. All Hoover in 2nd half.@HooverAthletics pic.twitter.com/oPrVN1B46U

The win put a smile on Hoover head coach Josh Niblett’s face after a week that saw the Bucs searching desperately for an opponent. Hoover was scheduled to play Dothan, but that game had to be cancelled due to a positive COVID-19 case at Dothan.

Both Central and Hoover were scheduled to open the regular season against Georgia high school football teams. However, the Central-Peach County and Hoover-Lowndes matchups were cancelled when Georgia pushed-back the start of its season.

No. 3 Hewitt-Trussville, which would have started No. 53 in the HSFA 100, rolled to a 44-19 win over Nix’s old team Pinson Valley. The Huskies were led by Auburn-recruit Armoni Goodwin, who only played three games due to a knee injury last year, ran for 196 yards Friday night with three touchdowns.

Speaking of Auburn, No. 6 Auburn High is off to a 1-0 start after beating Park Crossing 46-28. The Tigers ran out to a 24-0 lead and never looked back. JT Rogers scored three rushing touchdowns.

Next week, Auburn will face No. 10 Opelika, which opened with a 20-17 win over Stanhope Elmore.

MILLBROOK — Opelika running back Eric Watts shined and the Bulldogs opened their season with a 20-17 win over Stanhope Elmore on the road Friday night. https://t.co/cwEoQHi1kv