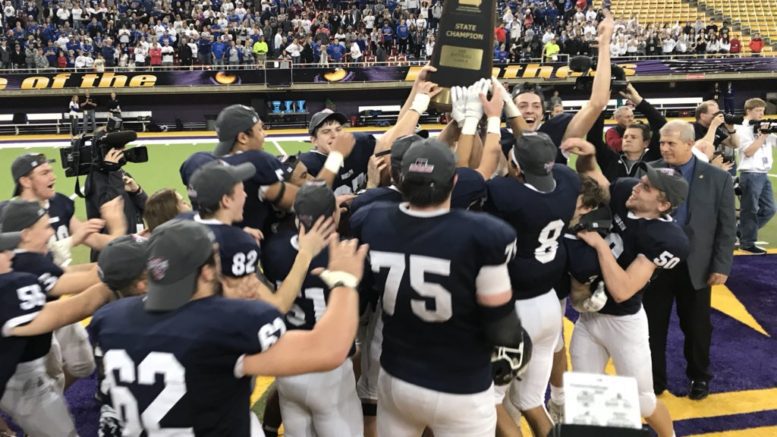 The 2017 Class A championship game left Hudson with a bitter taste for a full year.

It also made Thursday afternoon’s 30-7 win over AHSTW, Avoca all the sweeter inside the UNI-Dome.

The Pirates (13-0) avenged their runner-up finish with a dominant title game performance, holding the ball for nearly 30 minutes and shutting out previously unbeaten AHSTW until the final minutes.

“Last year’s finish set the tone for us all year,” Hudson quarterback Jacob Murray told gathered media members after the win. “We weren’t complacent in anything we did. We had to get back here.

“It’s an awesome feeling to finally get it done.”

Hudson controlled the ball and did almost anything it wanted to when it mattered against the Vikings (12-1). Coach Justin Brekke’s club finished 10-of-13 on third down conversions, rushed for 200 yards – including 161 on 32 carries from senior standout Christian Seres – and held physical AHSTW to just 16 rushing yards in the opening half.

“Our guys were fresh,” Brekke said. “We’ve got a lot of depth, especially at defensive line. We created pressure up front and then played man-to-man coverage behind it. A lot of people might think that’s crazy in a game like this, but it paid off and created pressure for us.”

Seres and Murray each ran in first half touchdowns and the Hudson defense stayed stout to earn a 13-0 lead at intermission. An Austin Appleton field goal in the third quarter gave the Pirates a 16-0 advantage, the Seres struck again moments later on a scintillating run, making multiple defenders miss tackles and breaking a couple more to score from 20 yards out. The touchdown put Hudson up 23-0, took the senior over 100 yards rushing on the day, and spoiled any chances AHSTW had of quickly getting back into its first title game since A-H-S-T lost the Class A final in 1991.

“They showed a lot of fight there at the end,” AHSTW coach Davis Pattee said. “I was proud of that.

“It was a really good team that we played and they didn’t make mistakes.”

Quarterback Blake Osbahr scored AHSTW’s only touchdown on a rollout run with 3:57 remaining. The Vikings averaged better than 200 yards rushing per game this season, but with star Gabe Pauley contained, and a screen-heavy passing game only delivering short results, they were stifled.

Hudson’s championship is the third in program history and comes in the third different classification. The Pirates won 2A in 1975 and 1A in 1994. Even though 2017 didn’t pan out the way they wanted, 2018 finished the right way.

“This is the ultimate goal,” Brekke said. “We do it together. I’m so proud of everyone involved with this program.”