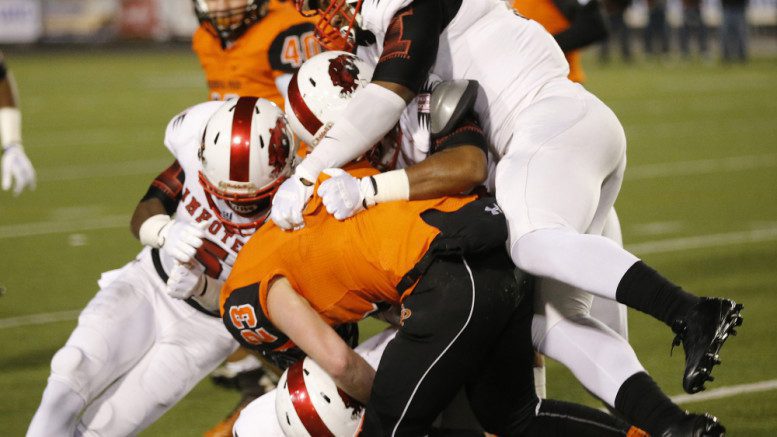 Two years ago, Imhotep Charter was attempting to become the first Philadelphia Public League football team to win a Pennsylvania state title and the result was a blowout loss.

Imhotep, ranked No. 13 in the Super 25, capped a perfect 15-0 season with a 40-3 victory against Erie’s Cathedral Prep to win PIAAA AAA title in Hershey and the long-awaited first PIAA title by a Public League team.

The Panthers outscored their four PIAA opponents by a combined score of 178-60.

Cathedral Prep (13-2) scored a field goal following a fumble recovery midway through the first quarter for a 3-0 lead. The Ramblers never scored again.

Imhotep used its high-powered rushing attack to post 245 yards on the ground in the first half and build a 20-3 advantage. Mike Waters had 99 yards and two touchdowns, and Isheem Young gained 96 yards and a touchdown.

Waters scored another TD on a 53-yard run in the second half for his 45th of the season to add to his city scoring record. He finished with 201 yards on 16 carries. His total was  37 yards short of the AAA title game record.

The margin could have been bigger but a 104-yard interception return by Imhotep’s Aamir Brown was wiped out by an illegal block. Brown did finish with two TDs on offense, though, on a 13-yard run and 41-yard pass from Nasir Boykin.

Cathedral Prep finished with 207 yards of total offense and was 9-for-34 passing for 84 yards.